Psychologists in hostels: Helping to end the cycle of rough sleeping by dealing with past trauma 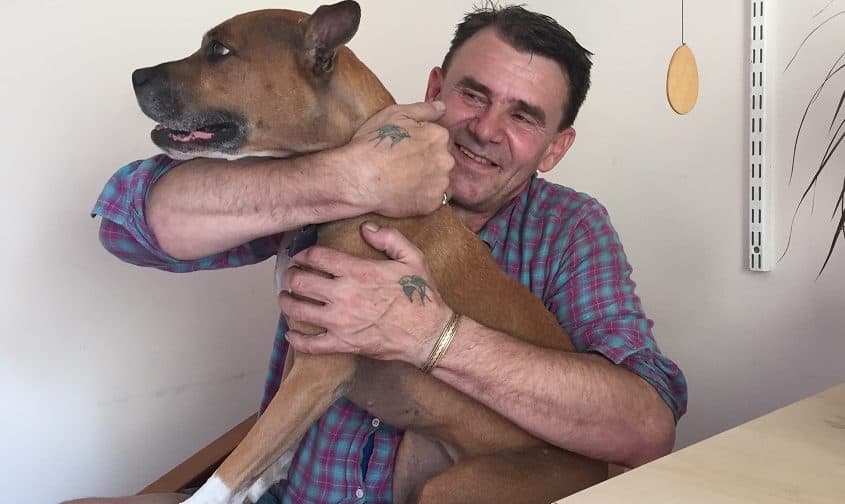 A former hostel client with Honey, the therapy dog.

A ground-breaking approach to helping rough sleepers overcome past trauma has achieved huge success, leading to hopes its approach can be expanded across the UK.

Even more remarkably, it has achieved this success while working with what its team describe as the most vulnerable people with ‘multiple, complex needs’.

These are chronic rough sleepers, many of whom have a host of mental and physical health problems and have cycled through support services, prison and back onto the streets, perhaps several times over.

What makes the Waterloo Project different to other services, is the one-on-one and group psychological support from South London and Maudsley NHS Foundation Trust is offered within the hostel itself, acknowledging that expecting its users to make and stick to allocated appointments elsewhere is simply too big an ask.

Instead, it’s all about offering support on their own terms, and not labelling them as ‘non-engagers’.

Dr Emma Williamson, clinical psychologist and Psychology in Hostels Service clinical lead at South London and Maudsley NHS Foundation Trust, told the News the experience of homelessness itself is highly traumatic, but behind this many of the people she treats have had difficult childhoods.

“They find relationships very, very difficult to manage, and find it hard to take help and can be suspicious of support,” she said. “When they do present, it is often via emergency services.”

“They are people who are trying to survive in the best way that they know how, and coping with the trauma they have.”

She says research shows that around 85% of those in touch with criminal justice, substance issue and homelessness services have experienced trauma as children. Around sixty per cent of rough sleepers were raised in care.

The hostel has nineteen beds and is run by charity Thames Reach and funded by Lambeth Council.

Often, the biggest hurdle to overcome is an innate mistrust of people and support services when they have been let down before: “Long-term rough sleepers become everybody’s problem but no one’s problem”, is how Emma describes the system.

The hostel has no ‘exclusionary criteria’, and will take on people whether they are still drinking, taking drugs or where other placements have failed in the past, as long as the safety of staff and other residents is not jeopardised.

Silvia Obrador, who manages the day-to-day running of the hostel, describes it as the best she’s worked in, but doesn’t gloss over the challenges of working with vulnerable people.

“Because lots of the people we work with are in a very lonely place, their social networks are very much fragmented,” she explained. “You are trying to overcome decades of people being very damaging to them, and then you’re often on the receiving end of that.”

Psychological support is offered in a ‘light touch’ way.

Far from not engaging, in the last three years, nearly eighty per cent of its residents have attended more than 1,600 therapy sessions.

Their next step – usually within a one to three years – depends on the individual’s own circumstances. Dr Williamson says it can take her up to a year of tiny steps forward, perhaps through chatting over a cup of tea or asking about a physical health problem, before someone will open up about what they are going through.

But when they do, they quickly make progress, with her research showing that after at least thirteen sessions they will begin to deal with the root causes that have led to their crisis.

Silvia says: “We do hear from former residents who are doing well. One lady had children in care when she came to us and now lives in a flat with her baby. It is very moving to hear that.”

Emma told the paper of her pride in one man who now is in a long-term relationship with a partner, but when he came to the hostel was dealing with trauma from childhood abuse in care.

Another resident was once so traumatised and suffering from serve anxiety that he would quickly become aggressive to staff when feeling under threat, resulting in evictions in the past.

But once the team realised anxiety was driving his behaviour, they were able to change their approach to one that worked better for him, leading him to sustain his accommodation, having never lived anywhere as an adult for longer than two months.

“We had a man staying here who really enjoyed art and he now teaches art therapy after studying a fine art degree.

“To overcome your own trauma and go on to help others, it is an incredible achievement.”

Work like this is expensive, but long-term keeping people from reoffending and out of A&E or other crises makes a huge difference to already over-stretched services.

Dr Williamson is now hoping the project will be used as a template in other parts of London and the UK.

Mark had been homeless on and off for more than a decade when he arrived at The Waterloo Project.

He experienced abuse as a child and in adulthood tragically lost his partner, all traumas compounded by sleeping on the streets.

Mark began to drink and take drugs as a coping mechanism, to try and suppress bad memories.

Although he tried staying in hostels, he found himself fleeing contact with professionals, having problems with other residents, and ended up in a cycle of bouncing back from hostels to the streets.

Mark has now been at The Waterloo Project for almost a year and although he still drinks, he no longer uses drugs.

He is slowly taking part in regular art groups and beginning to speak with psychologists.

Southwark NewsNewsPsychologists in hostels: Helping to end the cycle of rough sleeping by dealing with past trauma