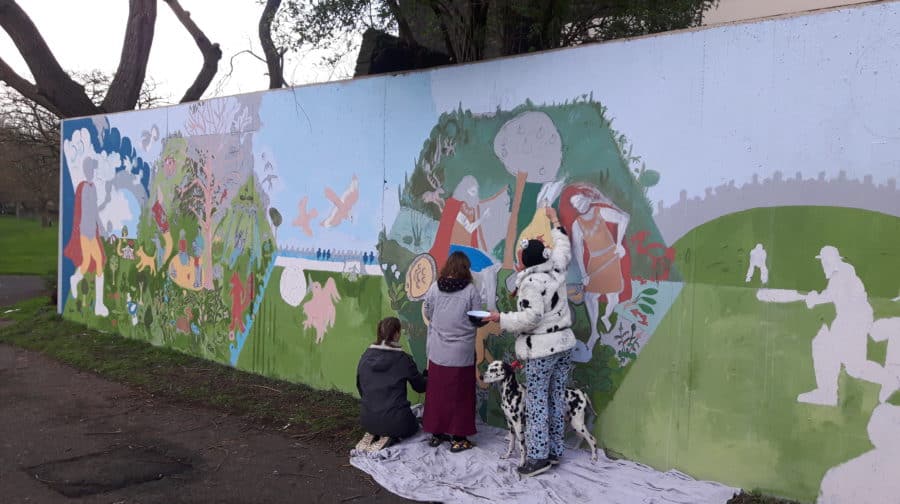 The first part of the mural nears completion in Kennington Park this week.

The public are invited to come and join in painting a mural in Kennington Park this week, writes Josh Mellor…

It was designed during 60 hours of workshops at nearby primary schools and community groups.

The colourful and intricate mural is split into fifteen bee-inspired hexagonal sections, each created by a different group and filled with images exploring the past, present and future.

Twenty-eight-year-old Camberwell artist and beekeeper Jack Fawdry-Tatham explained the design: “I work as beekeeper, and Bee Urban has really helped to facilitate the project, so it’s a nice little homage to them.

“It’s also a nice graphic way to view the mural from further away and then as you get closer there’s a lot more detail.”

The wall is on the border of Southwark and Lambeth by the Charlie Chaplin adventure playground.

The public are invited to pick up a paint brush and help out or to say hello until Thursday 18 April at any time between 10-5pm.

This is an amazing mural – and the UK’s longest community mural. Brewers decorating centre in Peckham donated all the paint – over 150 litres – and have set up an Instagram account WalkTheWallSE17 that lets you discover the stores behind the 28 images as you walk along it.