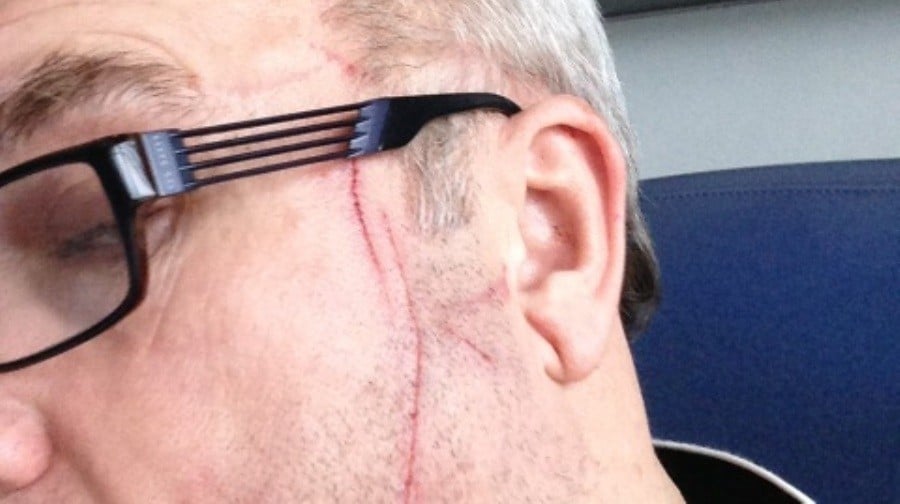 Injuries suffered during the taser attack.

A man was left paralysed on the floor after being tasered by robbers as he sat reading a newspaper in a Bermondsey bookies.

Steve Coughlan, 56, was attacked from behind in Ladbrokes in Southwark Park Road on March 19 by two men, who made off with his bag. Steve was unable to get up and confront his attackers because of the taser shock.

Steve said: “There was absolutely no warning. I was just sitting at the table, reading my paper. Then suddenly there was someone with their arm around my neck and I was being shocked.

“They kept doing it until I fell off the chair onto the floor. They took my bag, with my iPad, credit cards and cash in it.”

Steve thinks that, as a well-known face at the betting shop, he may have been specifically targeted by the two men.

He said: “I’m in the shop all the time, so maybe they saw that I was doing well. I’m not going to let them keep me from doing what I enjoy though. They don’t scare me – I was back a few days later.”

Steve outside the bookmakers where he was attacked.

Dave McCuster, manager of Ladbrokes, knew that something was wrong as soon as the two men entered the shop.

He said: “One of them was wearing his hood up, which didn’t seem right. I know all my locals and he wasn’t one of them. He walked past Steve as if he was coming up to the main desk, but then walked back to Steve and attacked him.

“Steve managed to crawl towards the middle of the room but they kept tasering him. The customers were great and were trying to help, but they couldn’t get near the man because he had the taser.”

One of the men was described by witnesses as being at least 6 foot 6 inches high. A police spokesperson said that the alleged attackers were both white males thought to be between the ages of 28 and 33.

If you have any information, you can call Crimestoppers anonymously on 0800 555 111.