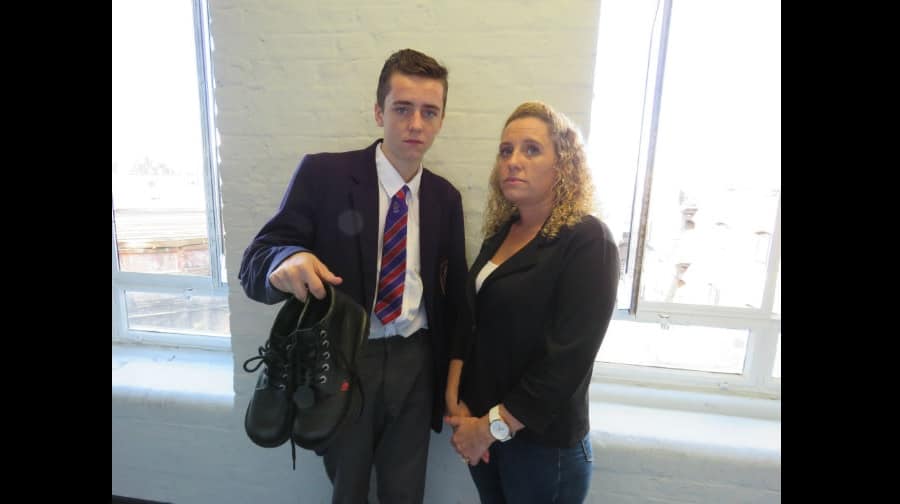 A parent has spoken about her son’s fears that his GCSEs may be threatened after City of London Academy Southwark repeatedly put him and others in “internal exclusion” – for incorrect shoes.

Alfie Rowsell, 15, is trying to finish his Geography coursework but because he is wearing the wrong type of black leather Kickers, he has been forced to stay in a Hall with around twenty others doing “random work”.

The new rules on uniform were introduced this year and has resulted in many student being sent home for little differences in their shoes, such as having Kicker Boots rather than Kicker Shoes.

Laura Conway, 33, Alfie’s mum, said: “I received a call from the school [COLA] saying my son in Year Eleven has just been taken out of lessons and put into a room because of school uniform issues.

“He was told he would have to stay there until he got the right shoes. It’s terrible because he went back with a really good attitude and now it’s been affected.

“He’s been wearing plain black leather Kickers. Last year he was wearing Air Force trainers which was fine. The school phoned me up and said if he doesn’t have correct shoes then they will keep him from lessons.

“I had to talk to Alfie to calm him down because he’s been worried about his GCSE coursework. This is unacceptable.

“I feel quite upset. There were 25 people in the Hall with him. The school have been offering to put the wrong shoes on eBay to help get money to buy new ones.”

Last week the News reported how parents were left frustrated after uniform changes at the school saw children sent home on the first day.

Marcus Huntley, Head of School at The City of London Academy Southwark, said: “We are pleased that the vast majority of pupils are meeting the Academy’s uniform expectations which have been regularly communicated to parents and carers. We would like to acknowledge and thank families for their support.

“We are now helping a small group of pupils to do the same, in order to maintain standards and create a positive learning environment. This includes supporting them with clear guidance and access to financial support where appropriate.

“Pupils who were not able to meet the uniform requirements continued their learning away from the classroom whilst supervised by a senior member of staff until midday when the school closed to prepare for an open evening.

“We will continue to work closely with the parents and carers and have reassured our pupils that as soon as we have achieved a positive resolution they will once again be able to enjoy their lessons with the rest of the Academy.”