"For some children, it’s their first visit despite it being on their doorstep.” 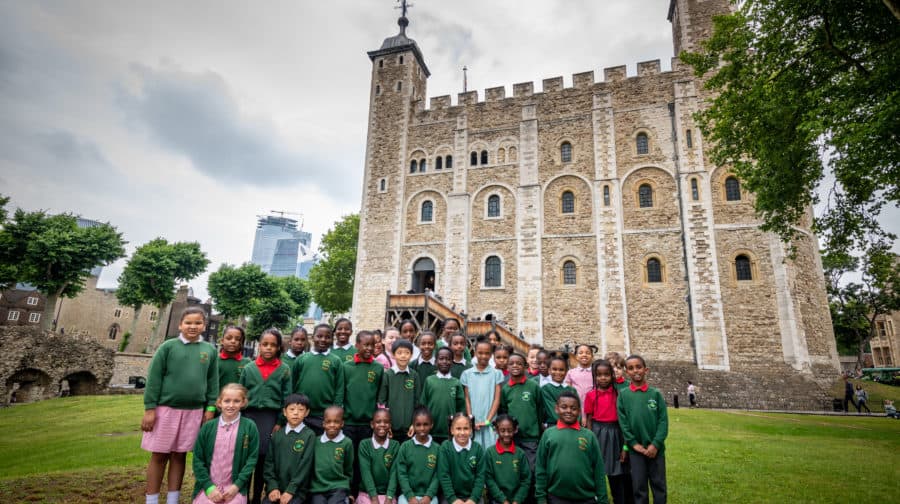 Budding musicians  visited London’s famous fortress for a performance like no other, watched by an audience of tourists, Yeomen, and ravens, writes Hillary Chaisson…

Historic Royal Palaces (the independent charity that cares for the Tower of London) alongside the musical charity, Water City Music, invited Nunhead’s Hollydale Primary School and Walworth’s Michael Faraday Primary School to perform at London’s iconic landmark at the end of last month.

This event aims to help students build their confidence by performing in unique surroundings and with a unique audience.

“Despite being so local, many of the students who performed at the event have never visited the Tower before.”

Many of the schools taking part come from London boroughs where the child poverty rate is among the highest in the country.

“Ultimately, we hope the event has a lasting effect on pupil’s self-confidence, sense of belonging and motivation to practise and perform music.”

The students performed a mix of existing pieces along with their own compositions, inspired by the Tower’s fascinating history as a palace, fortress and prison, home to the Crown Jewels, Yeoman Warders and legendary ravens.

The arts initiative featured over 1,000 children from both primary and secondary schools across London.

Tourists were treated to a mix of styles including jazz and funk-rock.

Reema Reid, Headteacher of Hollydale Primary School, who brought the Year 2-6 choir group to perform said: “Hollydale ensures that music is a vital part of our core curriculum, and so it was a privilege to perform at the Tower of London.

“This has been a wonderful experience for the children to create lifelong memories in such an iconic location.

“Some children wouldn’t venture as far as the Tower, and it’s really good to enrich their experience of living and growing up in London.”

Johanna Dalgarno, Head of Music at Michael Primary Faraday School, who brought the Year 3 – 6 choir group to perform said: “Our audition only choir rehearses once a week, and music is something we are very committed to in our school.

“It’s really helpful to have a public place to perform in, especially one as amazing as The Tower of London.

“For some children, it’s their first visit despite it being on their doorstep.”