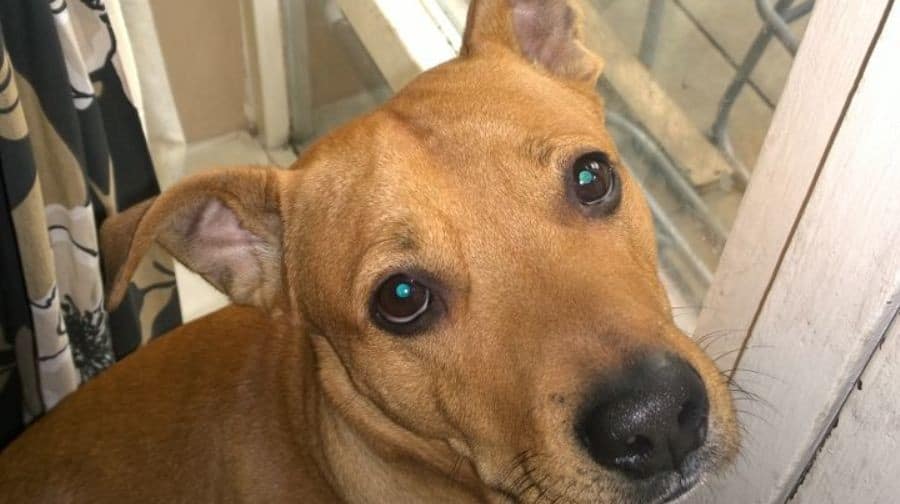 One pesky pooch is going straight in the doghouse after he managed to turn the oven on while his owners were out, starting a fire which destroyed their kitchen and very nearly burnt their house down.

Leo the Staffordshire-Boxer cross, sat looking sheepish as fire investigators pawed through the blackened remains of Allen Mosey’s kitchen in Chandler Way, Peckham after the blaze on March 3.

They concluded the electric hob had been turned on causing a child’s booster seat resting on the hob to catch fire.

Allen, 67, said there were some biscuits on the top which the canine culprit was trying to get at when he must have accidentally turned one of the oven top knobs. Thankfully no one was hurt as the flames took hold, leaping across the kitchen and causing the tumble dryer to explode.

Allen and Jean Mosey’s son and their daughter’s boyfriend were upstairs but unaware of the blaze until the smoke started rising.

They raised the alarm and managed to escape, saving Leo, two turtles, a snake and the hamster – renamed Smokey by the firemen attending – from a fiery fate.

The Moseys are now living off sandwiches while they wait for their kitchen to be replaced, but they say they make no bones about it with their beloved pet. “You wouldn’t think butter would melt in his mouth to look at him,” said grandfather of five, Allen.

“He’s the most docile dog you could think of,” he added. “He’s a part of the family, we wouldn’t part with him,” said Allen’s wife, Jean Mosey, 45.

Allen Mosey in his blackened wreck of a kitchen

There was a lot of smoke damage to the property and the family “lost everything” in the kitchen, but their neighbours are now rallying round with donations of white goods and crockery. “It’s all going to take time but we’ll get there,” said Allen.

A London Fire Brigade spokesperson said: “We’re naturally extremely pleased that no one was injured in this fire and while unusual, it’s not unheard of for our crews to deal with incidents like this. “It shows just how important it is to keep pets away from naked flames or cooker controls and to make sure kitchen surfaces and cookers are clear of food and other items that can easily catch fire.”