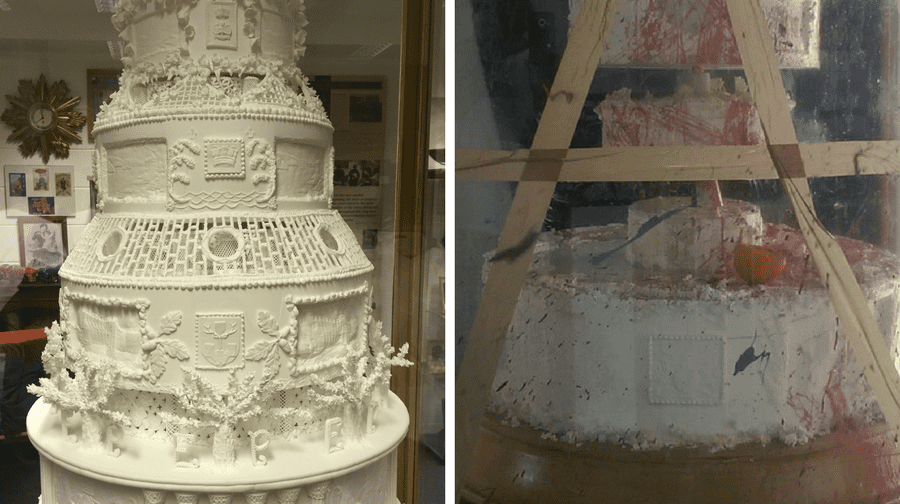 A replica of one of the Queen’s wedding cakes – made in Bermondsey by Peek Frean & Co – was restored just in time for her 70th anniversary.

Skilled workers at the Peek Frean biscuit factory, off Clements Road, made a six-foot tall cake and carefully transported it to Buckingham Palace at walking pace for the then Princess Elizabeth’s marriage to Prince Philip in 1947.

Staff at the factory are said to have been so proud of their creation that they decided to make a full-scale replica of the cake out of icing sugar.

But vandals broke into Rotherhithe’s Pumphouse Museum two years ago, where the replica was stored once the factory closed, and destroyed it.

Not knowing how to fix it, Peek Frean Museum keeper Gary Magold is said to have first called in a plasterer to look at the cake – before realising it was in actual fact made of icing sugar.

He then contacted the British Sugarcraft Guild (BSG), which inspected the cake and decided another replica would have to be made again from scratch.

Warwick University scanned the panels and plaques of the replica to make 3D prints, which were then sent to a mould maker in Bristol.

Each of the six tiers of the cake were sent to various branches of the guild across the country, where members spent hours upon hours recreating it in painstakingly intricate detail.

Members of the guild even visited the Royal Collection at Buckingham Palace to 3D scan a silver ornament of St George and the Dragon, which sat atop the original wedding cake, in order to recreate it using icing sugar.

Speaking to the News, Gary Magold said: “The main cake is always made by the Royal Navy but there were eleven cakes selected to go to the palace and Peek Frean was one of them.

“There was only ever a full-scale model made of one of them, and that was of the Peek Frean cake.

“All of the plaques on this one depicted something that meant something to the royal couple.

“It’s actually quite emotional seeing it finished; when I found out the Pumphouse had been smashed up I couldn’t understand the reasoning for doing it.”

Judy Banks, national chair of the BSG, added: “We didn’t break anything while putting it together but it was quite stressful at times.”

The recreation of the replica cake will be officially unveiled at the Peek Frean Museum on November 30.

The British Sugarcraft Guild was formed in 1981 by people interested in sugarcraft and it now has about 3,500 members across the world.

What’s on the cake:

Top tier: The centre plaque depicts a motor torpedo boat as used by the Sea Rangers in which Princess Elizabeth served, and on each side of this there is a Sea Rangers badge.

Second tier: Depicts Dartmouth Royal Naval College at which the Duke of Edinburgh received naval training, and on either side of this is a plaque showing the naval crown.

Third tier: St George’s Chapel, Windsor, and on either side the Windsor coat of arms.

Sixth tier/base: Depicts Glamis Castle, the seat of the Earl of Strathmore, and plaques show the Strathmore coat of arms.