The deceased has been named locally as Jason Bent 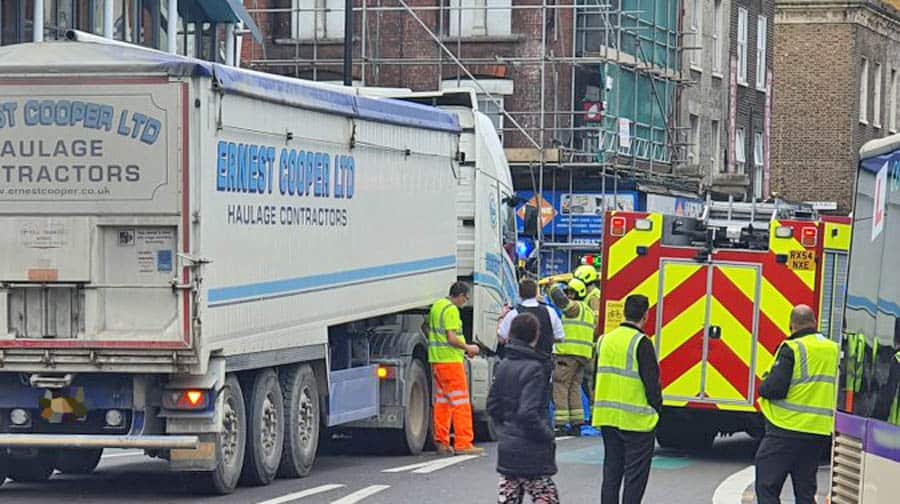 There has been widespread shock after another person lost their life on a stretch of Peckham High Street that has been branded a death-trap for years.

Emergency services raced to Peckham High Street on Wednesday afternoon following reports of a collision between a pedestrian and an HGV near Burger King.

A 48-year-old was pronounced dead at the scene despite paramedics and London’s Air Ambulance arriving within minutes. His next of kin have been informed.

The man has not been named by police but the News understands he has been named locally as Jason Bent, a Peckham local.

The Met said the HGV driver, who has not been arrested, is assisting with enquiries, and urged any witnesses, people with phone footage or dash cam footage to come forward.

In September 2015, tributes poured in for great-grandmother Mary O’Leary who died after being hit by a lorry on the same road.

Two years later, a man died on September 4, 2017 on Peckham High Street. He also had been hit by a lorry.

A petition, to improve the road layout, has already been created online with 160 signatures within a day.

The petition says: “It is clear to see the road does not have a safe layout and there should be an island in the middle by the traffic lights for people to safely wait at and also outside the Peckham Pulse there should be railing along the centre island to stop pedestrians running across which is very dangerous.

“My heart goes out to the families who have lost loved ones in these horrific accidents and strongly believe something needs to be done to provide a safer crossing for people to get across safely.”

In a statement shared with the News, Peckham’s councillors said they were “heartbroken” by the tragedy, and frustrated that improvement works had been slow to come.

Councillors Johnson Situ, Cleo Soanes, Barrie Hargrove, Nick Dolezal, Peter Babudu and Jasmine Ali from Southwark  said: “We are heartbroken to hear of the tragic death on Peckham High Street today, our thoughts are with the victims family and friends.

“Sadly this is not the first tragic death on this part of Peckham High Street.

“Yet again it raises the crucial issue of safety on Peckham High Street, a key section  of the TfL highway.

“As local councillors we have repeatedly raised road safety on Peckham High Street with TfL and while they insist that they’re working on proposals, today’s death sadly shows that we need a rapid response.

“We urge TfL to take immediate action to improve safety on Peckham High Street for the safety of our residents.”

Sam Monck, Head of Delivery Planning for Healthy Streets at TfL, responded to the News‘ request to comment on their claims.

Monck did not respond to our query about why improvements had not been completed after previous deaths several years ago, and were still in the planning stage.

He said: “Our thoughts are with the family and friends of the man who was tragically killed whilst crossing Peckham High Street yesterday.

“Every death on London’s streets is one too many and safety is always our top priority when making changes on our roads.

“We continue to work on a scheme to reduce danger in Peckham Town Centre as part of our Vision Zero goal of eliminating death and serious injury on London’s roads.

“The engineering scheme in Peckham has been extremely complex to develop, however we remain committed to vital safety improvements there and will be consulting the public on a design early in the coming weeks, with a view to starting work following public feedback.”

Anyone with information should contact the Serious Collision Investigation Unit at Catford Traffic Garage on 020 8285 1574.

Thank you for raising the light on my petition. I really hope that something will get done about the safety on that stretch of road.