The ultimate boys' toy project was partly funded by Ladbrokes 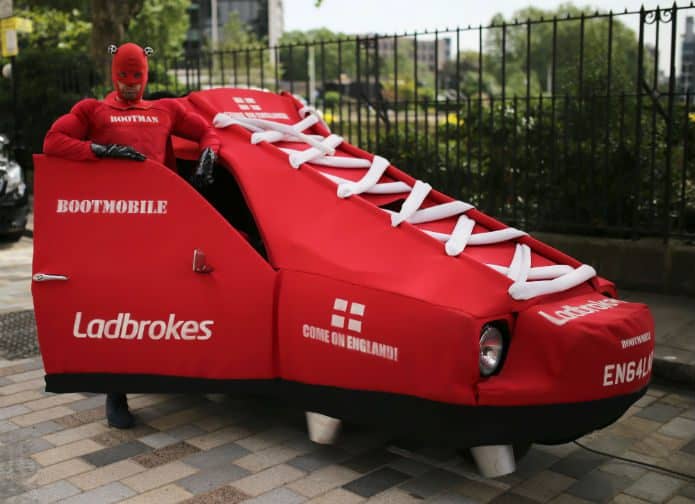 A football mad car obsessive has turned an old Robin Reliant into a giant football boot in honour of the Euros and plans to auction it off, giving the proceeds to a kids’ football charity, Emma Finamore writes…

Nathan Whitfield, 26, is a model-maker and street artist from Blackfriars, who tinkers with cars in his spare time at his workshop off the Old Kent Road. He unveiled his ‘Bootmobile’ at Tower Bridge last week: an over-sized three-wheel football boot in England colours, featuring giant laces and super-size studs.

He approached Ladbrokes for help with funding as he thought that “they might have a similar sense of humour”, and the colour palette matched the England football strip. Nathan received a three-figure sum from the gambling firm.

As well as the ‘Bootmobile’ Nathan has created a ‘Bootman’ outfit, with a ‘Bootility Belt’ featuring all the essentials for a good football match: a vuvuzela, an integral pasty-holder, a whistle, and red and yellow cards.

“As a kid, my two obsessions were Playmobile and Action Man, so I guess the Bootmobile and my new outfit combine my two passions,” said Nathan. “My workshop’s near Peckham, so part of the inspiration was Del Boy’s van in Only Fools and Horses.”

At the end of the Euros tournament, Nathan and Ladbrokes will hold a ‘Car Boot Sale’ – an online auction of the ‘Bootmobile’ to raise funds for a kids’ football charity.

Alex Donohue from Ladbrokes, said: “We love Nathan’s obsession for football and for cars – and the idea that we’ll be able to auction the car for a good cause at the end of the Euros makes his obsession a winner.

“We have England at 8/1 fourth favourites to win the Euros. We love Nathan’s spirit and optimism.  At auction the ‘Bootmobile’ could be worth even more if England deliver!”