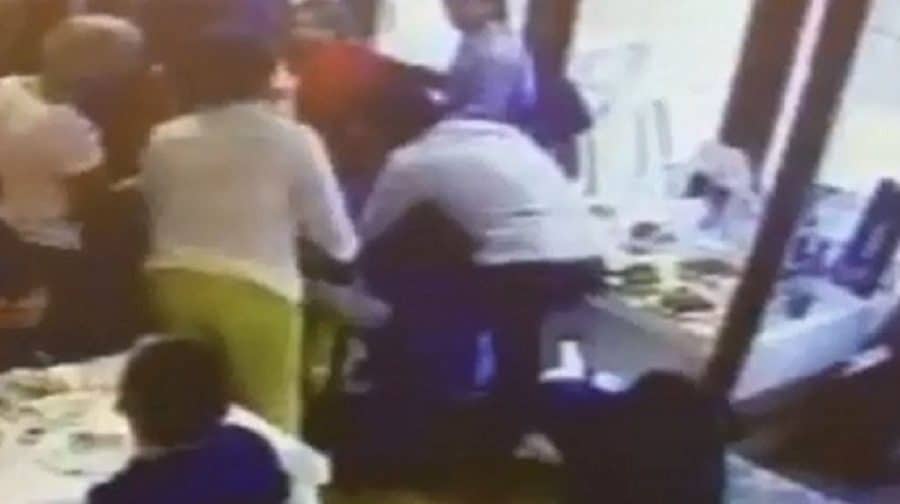 A quick-thinking SE1 restaurant manager saved one of his customers from choking on meatballs by dashing to his rescue to perform the Heimlich manoeuvre.

Cem Canpolat, who manages the Tas Restaurant on The Cut, was deep in conversation with a colleague when he heard a customer screaming – the first sign that one of his diners was choking.

“He was red in the face and trying to breathe,” said Mr Canpolat. “I remembered the manoeuvre which we learned during the course.

“I heard his wife screaming, because she’d tried to hit his back, but she couldn’t manage it properly. I was quite shocked.” The 34-year-old restaurant boss can be seen on footage of the incident on July 27 dashing out from behind a counter to the diner’s aid to perform the Heimlich manoeuvre, which he learned on a first aid course.

The technique involves applying sudden pressure on the abdomen between the navel and rib-cage to dislodge obstructions in the windpipe.

“I tried it about eight times. If he was standing it would’ve been easier to do it maybe. And then he started breathing again,” he said.

“Me and my customer were really happy,” he added, but the business did not think to get details of the diner, described as being in his forties. Mr Canpolat has been hailed a hero by his customers for his quick-thinking actions after the Turkish chain shared CCTV footage of what had happened online.

“Well done Cem. That deserves an award,” said one while another added: “Super star! Well done that man.”

But the modest restaurant boss said he wants the incident to raise awareness of the life-saving technique and of the need for first aid training.

Staff at the business regularly get first aid training from the London Ambulance Service in Waterloo, as well private lessons, which he urged other businesses to emulate.

“All types of people don’t know where they should get first aid from,” he told the News. “That’s why I’d like to raise awareness of this manoeuvre and first aid generally.

“[Having] someone with first-aid training can save someone’s life.”

Luckily the diner was luckily was not seriously hurt after the choking near-miss.

“He waited about ten minutes, and then he went back to eating his dinner,” added Mr Canpolat.