A rare Roman coffin discovered in Southwark will be exhibited for the first time for the public to see at the Museum of London Docklands this year, writes Katherine Johnston…

The sarcophagus was excavated on Harper Road, off New Kent Road, over the course of several months in 2017, in an area archaeologists say was part of a large cemetery in the Roman city of ‘Londinium’.

The team who unearthed the stone coffin hailed it as a ‘discovery of a lifetime’ as only two other sarcophagi have been excavated in London at their original burial sites.

The sarcophagus was discovered with its lid partly open but body intact, implying that past grave robbers may have stolen its valuable items. It will now be on display from May to October at the new Roman Dead exhibition, alongside 200 other Roman artefacts found in the capital.

Now the museum hopes the exhibition will shed light on the ancient city and Roman Londoners’ burial rituals and attitudes to religion and death.

Jackie Keily, a senior curator at the museum says: “During its 400 year period, Roman London really flourished and became a centre of trade. It’s incredible to think that two thousand years ago, people from all over the world have been meeting in Londinium to exchange ideas.”

The city of Londinium was founded in AD 43 after Britain was invaded by Emperor Claudius. At the time, the London of today was a network of marshy islands surrounded by water.

“The last 30 to 40 years’ worth of research has shown that Southwark, far from being a small settlement or just farmland south of city, had actually developed into an important Roman suburb with key routes such as those leading into other centres like Chichester and Canterbury,” explains Ms Keily.

The exhibition will map the hidden Roman cemeteries hidden beneath our modern-day streets and show Roman skeletons and the goods they were buried with in preparation for the afterlife.

Ms Keily says: “We often think of burials telling us about the person who has died, but we can also learn a lot about the families left behind and what their life was like.”

Some of the relics on display include four male skulls with signs of meeting violent deaths, a tombstone from the grave of a ten-year-old girl found during excavations of City Wall in 1979, and a jet pendant discovered in a site in Tower Hamlets that depicts the image of the mythical figure Medusa. The exhibition will also examine the science behind studying ancient human remains.

Despite its grisly topic, the interactive exhibition will be family-friendly and include activities for children.

Roman Dead is exhibited at the Museum of London Docklands from May 25 to October 28, 2018. Entry is free. 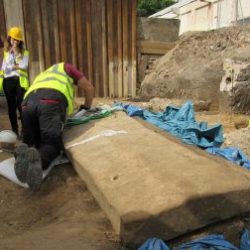