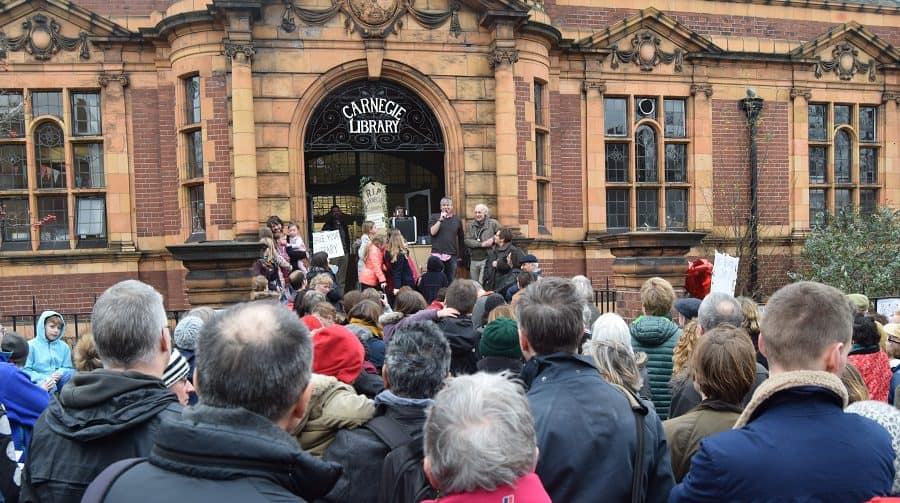 A protest last year against the closure of Carnegie Library Protest

The re-opening of Carnegie Library – located just off Denmark Hill – has moved a step closer as Lambeth Council has chosen a partner to take community ownership of the building, writes Becky Morton…

The Carnegie Community Trust (CCT) was judged by the council with “independent advice” to have submitted a stronger bid than rival organisation, Carnegie Library Association (CLA), which was formed by the Friends of Carnegie Library.

The CCT said it remained opposed to the idea of a gym in the library’s basement and had “serious concerns” about some of the additional alterations proposed by Lambeth Council and Greenwich Leisure Limited, who will manage the gym.

A statement continued: “Some of these are poorly thought out and would seriously damage this wonderful Grade 2 listed building. Now that the Trust is the Preferred Community Partner we will meet Lambeth and GLL to see if we can secure amendments to these proposals.

“We aim to ensure that the rental from the gym in the basement supports the community use of the rest of the building.”

The CCT’s proposal for the building includes a library, Enterprise Centre for use by local self-employed people and small businesses, and other community activities on the ground and first floors.

Planning permission has already been approved for the excavation of the library’s basement to accommodate a gym. Contractors are due to begin work in the next few weeks.

The CLA, who submitted a rival bid, have said they will appeal the decision to name the CCT as the preferred community partner, citing a lack of evidence of CCT’s community engagement and capital funding for its plans.