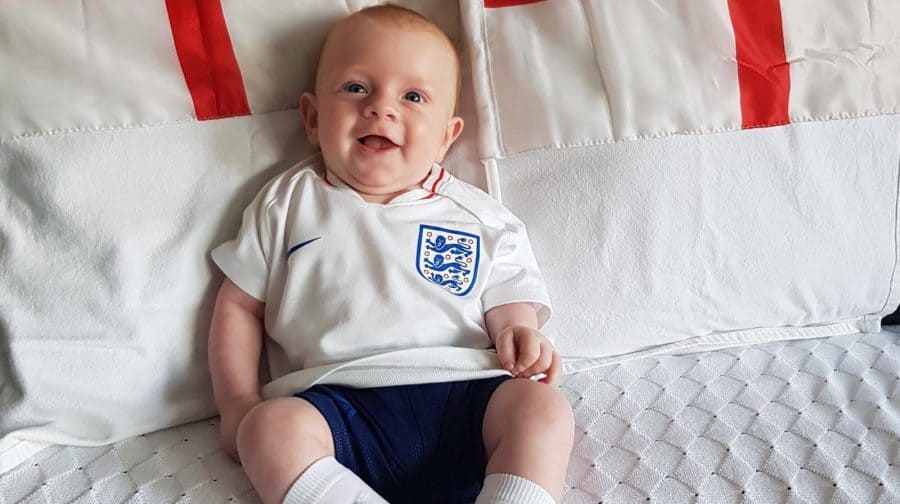 Baby Ethan from Rotherhithe has proved to be England’s lucky charm for this World Cup, with the team having won every game when he has been sporting the kit.

England have had an incredible tournament, with captain Harry Kane leading us to our best chance of the semi-finals since 1990.

Now Ethan is ready to help the team again in the quarter-final clash against Sweden this afternoon.

The 29 year old was later diagnosed with a rare genetic condition called ipex syndrome, which caused the fetal hydrops and means her likelihood of having a healthy baby boy is slim and that if she gives birth to a daughter, they will inherit the same condition.

But on April 16 this year Sophie defied the odds and gave birth to little Ethan – whom she says is England’s lucky mascot as the football team has never lost while he has been wearing their full kit. Speaking to the News after England’s win against Colombia on Tuesday, Sophie said: “Ethan was born and suddenly England are doing well.

“The first time he didn’t wear his full England kit they lost against Belgium, but every other time he has worn his full kit they’ve won.

“Ethan is our miracle – and England is now another miracle.”

We are all hoping that adorable Ethan will be our good luck charm once again vs Sweden in the quarter-finals, and that England can pull off a miracle of their own by defying the odds and reaching the semi-finals.

England were triumphant against a tough Colombia side in the first knockout stage of the tournament, and the News was on the now-viral Kirby ‘World Cup Estate’ capturing the reactions of English and Colombian fans as it happened.

To read our full coverage of what has been an incredible week for England in World Cup, including pictures, videos and interviews, click the link below:

The Week That Was: Highlights of England’s Success and Build up to the Quarter Final on Bermondsey’s World Cup Estate

The News will once again be covering all the World Cup action from the Kirby ‘World Cup Estate’ in Bermondsey so stay tuned for more updates.