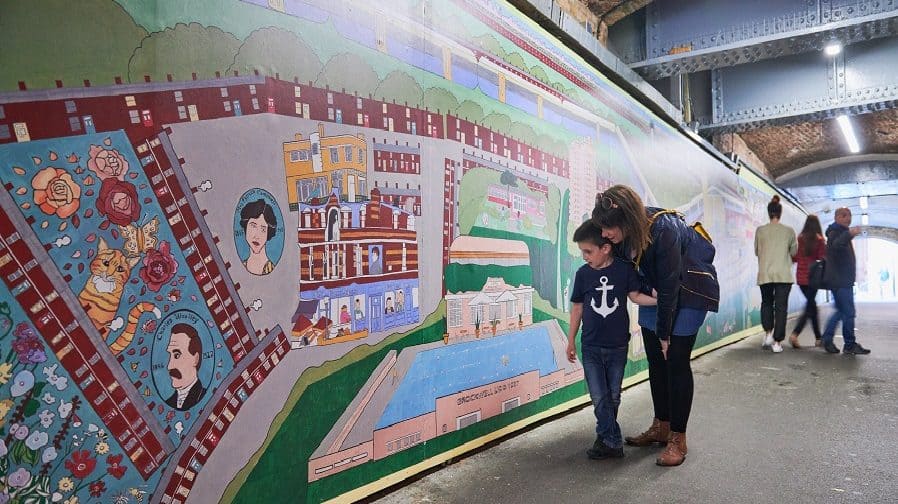 The community group behind a world record-breaking mural designed by thousands of residents in Herne Hill are hoping a fall-out with their artist won’t overshadow the new artwork’s unveiling.

They were joined by actor Mark Rylance and local MP Helen Hayes as they more than doubled the number of participants achieved by the previous record-holders in Mexico.

The mural, which celebrates the best of Herne Hill’s people, landmarks and history, was installed in the underpass at Herne Hill station last week. “Over 2,300 school kids and locals rolled-up their sleeves to bring the mural to life and break the Guinness World Record for the most contributions to a colour by numbers mural.

“The mural, designed by Victor Szepessy, captures the spirit of Herne Hill and its community, past and present.”

He said it had already transformed the ‘dark and grotty underpass’ and made the space a ‘community focal point’.

But the installation, reproduced on durable vinyl to protect it from graffiti, rain and damp, while a safe permanent home is found for the original, hasn’t been welcomed by everyone after the artist claimed the replica was made without his permission, claiming he specifically refused to sign a consent form for its creation.

“The real mural is made of durable material and has anti-graffiti varnish,” he said on Twitter.

“It was commissioned and made for the location and there is no technical reason for it not to be installed.”

He said the events had left him ‘absolutely heartbroken to see a PVC copy of my artwork’.

The News understands the forum’s members have been left perplexed by the claims, as they maintain a full license in perpetuity was agreed before the project began, giving them the rights to make reproductions.

They are now worried the dispute threatens to overshadow their achievement in bringing thousands of people together to create a positive tribute to their community.