Reg originally wanted to join his local police, but he was just ½ inch too short - so instead he joined the Met 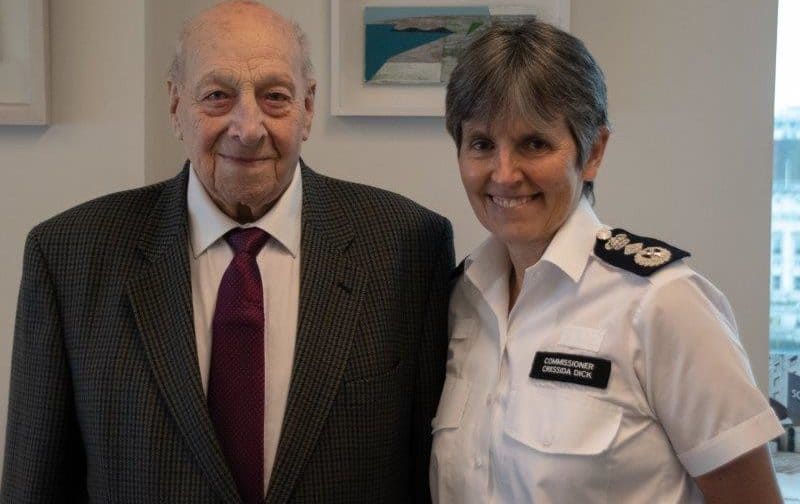 A 100-year-old ex-Walworth copper has celebrated his birthday by paying a visit to New Scotland Yard to meet the Met’s top cop.

Retired Met PC Reg Dunn continued his birthday celebrations last month after the National Association of Retired Police Officers put him in touch with the Met and commissioner Cressida Dick wrote to him.

Reg joined the Met on January 23, 1950 after returning Sunderland from Egypt and Palestine where he served with the RAF, 52 MT Unit during the Second World War.

Rumour has it that Reg wanted to join his local police, but he was just ½ inch too short. So he tried to join the Met instead, where he was 1/2inch taller than the minimum limit. Reg and his family moved to the capital where for 25 years he was PC M623 and latterly L404 Dunn – Beat Bobbie and Area Car Driver of Carter Street Police Station in Walworth.

“Policing has changed enormously since I joined the Met back in 1950 but I would still be proud to serve today,” he said.

“If I could offer any advice to current officers, it would be to cherish every moment and remember colleagues become friends for life.”

Cressida Dick, the force’s top cop, said police should never forget the service of people like Reg, who have made “British policing so admired worldwide.” “It’s wonderful to be able to congratulate Reg Dunn on behalf of all the officers and staff of the Metropolitan Police Service on this special occasion,” she said.

“This is a small recognition which I hope will serve as a reminder for the service Reg gave and bring back many wonderful memories.

“The policing career may have changed since Reg started his career, however we must never forget to recognise the history, principles and people like Reg, which have been our foundations and have made British policing so admired worldwide.”