George has cut and measured for the likes of Paul Weller, Martin Freeman and The Stereophonics 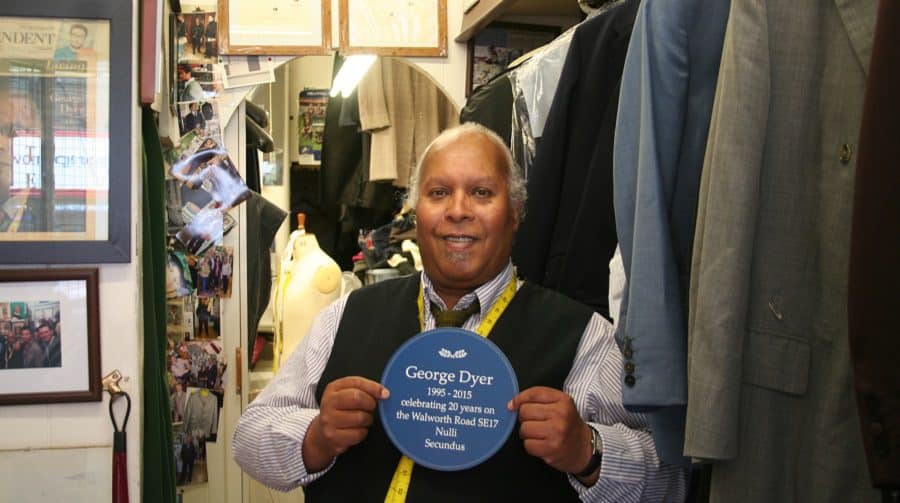 A renowned tailor in Walworth Road is celebrating the 100th anniversary since suits were first being struck and fitted at his premises.

It is 23 years since George Dyer – who has worked for the likes of singer Paul Weller and actor Martin Freeman – first took over The Threadneedleman unit at 187A. But upon arrival, the Peckham-born man was told that the tailors started there in 1917.

The 61-year-old from Peckham said he was “the fourth owner of this shop to have been tailors” in that time.

“The first guy who started a tailor business here was John Newton,” George said. “He later sold it to Ron Martin, who had his name put in letters above the shop’s door, and had the shop for 25 years.

“The guy who had it before me 23 years ago was a Greek man, Archie Constantinou, who I used to drink coffee with.”

George was recently given a map of early twentieth-century Walworth, which shows a section of the Walworth Road, just north of his shop, labelled as Savile Row.

“People used to like to change the names of the streets,” George said, saying that the area had a “flavour and a taste for bespoke suits”.

George was the son of a Jamaican immigrant, Oscar Dyer, a trouser maker and a builder. He went to school at Peckham Manor – now Harris Academy, and the first pair of school trousers he wore were stitched on his dad’s old Singer treadle machine. He added: “I left school before my seventeenth birthday, and my dad told me I had to learn a trade. He didn’t say to get a job, he said ‘learn a trade’.”

He followed on his father’s footsteps and worked for tailors called Dombey and Son, and ended up greeting customers in Fleet Street.

“It was when all the newspaper were still there, and all the customers would be barristers and reporters,” George said. “In that place you had to be immaculately turned out. The men still wore bowler hats and black rolled up umbrellas and black crombies, and everyone addressed each other as Mr.”

He said he owed his career, in part, to the generosity of his old boss, Mr Dennis, who paid for George to go to the London College of Fashion.

George was awarded a custom-made Southwark Heritage blue plaque in 2015, given by Walworth residents after he came a close second in a public vote for the plaque to Bermondsey funeral directors FA Albin & Sons.