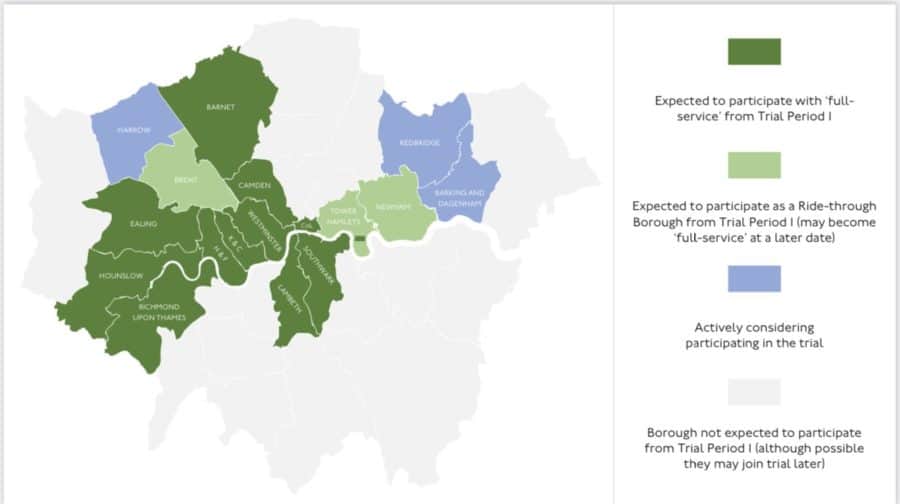 Areas taking part in the trial, due next spring (Image:TfL)

Rental e-scooters will come to Southwark’s streets as part of a trial to test safety.

The trial, due to start in spring next year, will see the rental e-scooters in a “geographically limited area” including Southwark.

The scooters will be allowed to use the same spaces as bikes, but not pavements. Councils will also be allowed to designate certain areas as “no-go” meaning the rental scooter will automatically cut out.

Other areas may be designated as “go-slow”, meaning the scooter will be limited to a max speed of 8mph.

“We’re determined to make sure that London recovers from coronavirus as safely and sustainably as possible and are supportive of innovative solutions that could help,” said Michael Huwitz from TfL.

“Safety will be our number one priority during this e-scooter rental trial, which will be critical to providing us the data and insights we need to determine whether e-scooters are a viable part of a greener and healthier future for London.”

Operators signed up to the trial will be required to provide data on safety and usage. TfL hopes being able to use rental e-scooters can prevent a surge of car use after coronavirus.

Other council areas taking part in the trial include Lambeth, Camden and Westminster.

The news comes amid a warning from the Met Police about people using private e-scooters to commit crime.

Since July, officers have had reports of over 290 crimes carried out involving an e-scooter, including robbery, assault and theft.

The number of collisions involving e-scooters has gone up from four in 2018 to 31 in 2019. Collisions are likely to still be underreported, said Ch Supt Simon Ovens.

“I believe that some people are using e-scooters as an attractive mode of transport, especially in their commute to work, but they remain notoriously dangerous, and illegal when driven in public areas or on the roads,” he said.

Riders do not need to pass a test, and users often do not wear helmets or lights, he said.

He added: “In the lead up to Christmas, we want to remind people that if you are buying one, under current legislation, you can only ride it on private land with the land owner’s permission.

“If you are out on an e-scooter in London, expect to be stopped by officers as we continue to help keep Londoners safe.”

Illegal scooters have been all over Southwark for years and nothing is done . Driving at speed on the pavements and terrorising the vulnerable .