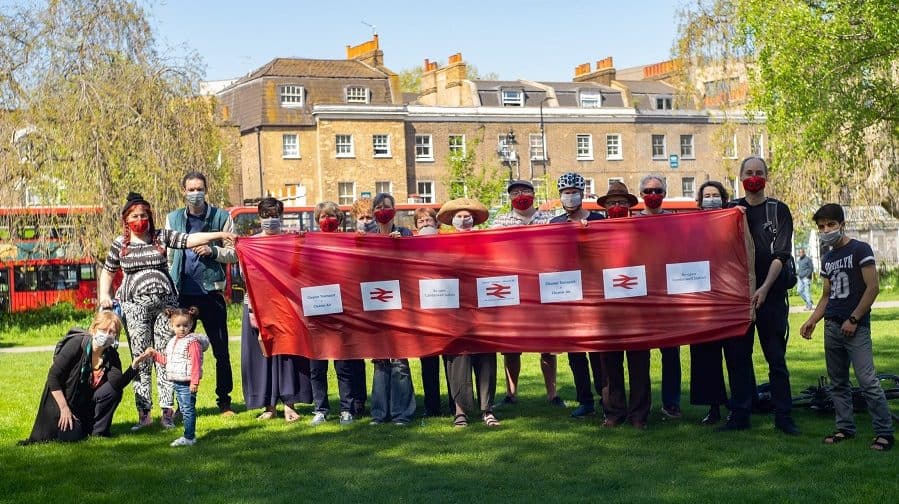 Residents who are lobbying for Camberwell station to reopen staged a demonstration on Camberwell Green last Saturday, to highlight the impact of high levels of traffic pollution in the area.

The group hopes Harriet Harman and Helen Hayes will hand a 2000-signature petition to reopen the station to the Minister of State for Transport, Jo Johnson, on May 15,

Campaigner Sophy Tayler, says: “We are worried TfL is shunting this important project into the sidings.”

She says documents obtained by the group from TfL focusing on the proposals do not include full air pollution and traffic studies.

“These issues will continue unless there is a step change in transport options.

“More rail users come from outside London, than get on at Camberwell, so we don’t get a high enough benefit cost ratio to boost the business case for re-opening.

“But this could mean inner city Camberwell never gets a meaningful chance to improve transport options and air quality.”

However, Matthew Yates, TfL’s Head of Transport Planning and Projects, said: “We are working with Southwark Council and Network Rail to produce a business case looking at reopening the Camberwell Thameslink station.

“One of the key things we need to assess is future public transport needs and demand to determine if the project should be taken forward.

“We anticipate the business case will be released shortly.”

According to TfL, the full business case, which is expected to be published in due course, will include an analysis of air quality and the expected impact on traffic.

Although Camberwell station closed to passengers in 1919, the platforms and infrastructure exist between Loughborough Junction and Elephant and Castle on the Thameslink line.

However, as yet no documents have been made publicly available.