A Time Booth to scream into could come to an office near you, its creators say - as it would be ideal for stressed office workers 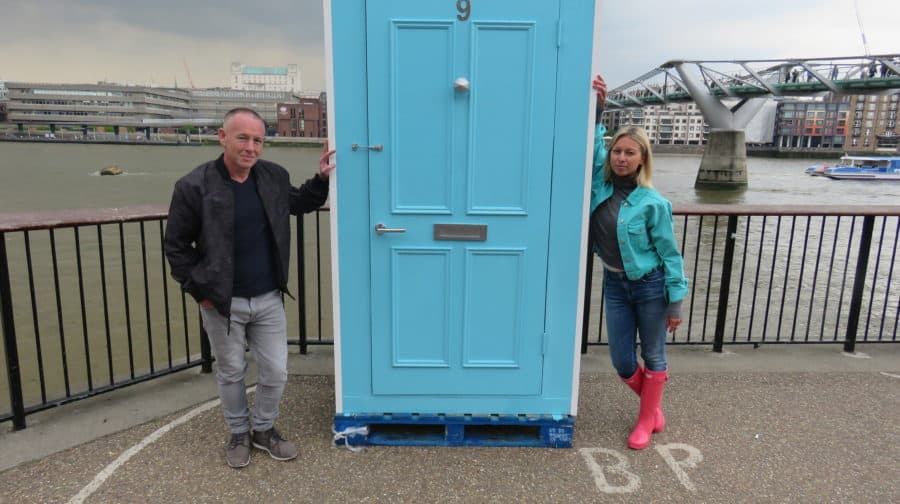 Paul Quigley, (L) and Nadia Filitova (R) next to their home-made 'Time Booth' which people can scream as loud as they like into

Most of us could often do with a scream in public but have to resist the temptation out of worry of what others might think.

Now a solution might be at hand after two local residents have built the ‘Time Booth’ – a home-made soundproofed box for people to scream into as loudly as they can.

The bright blue Tardis-like booth is the brainchild of friends Nadia Filitova, of Rotherhithe, and Paul Quigley, who lives in South Norwood.

At a trial run of the box, placed outside the Tate Modern last weekend with the help of Bermondsey-based LRC Couriers, during Mental Health Awareness Week, curious passers-by – including the News – tried out the concept. Nadia stumbled upon the idea of a screaming booth when she was in a spa with Paul and had to let out her work anger and frustrations.

“I was just feeling a bit frustrated with work, and Paul suggested I put my head under the water and scream,” said Nadia, aged 34. “It helped me release the tension of it all.”

With the help of Paul, a builder by trade, Nadia set about creating the prototype booth in her spare time and using their own funds. It has taken around four months to build, costing around £1,500.

Reaction to the booth has been overwhelmingly positive, said Paul. “When they come out and you say ‘do you want to go again’, they all say yes.”

Around 200 people had tried out the scream-booth in four hours, estimated Nadia.

While some friends and family were initially taken aback, they have all gotten on-board, said Paul, who grew up in Elephant and Castle. “They say they could do with one at home!”

This may yet be the plan, said Nadia. There are two main ideas for a fully sound-proofed booth, she told the News: either to form part of an art project, or to produce as a de-stressing aid for under-pressure workers. A willing volunteer tried out screaming inside the Time Booth

“People want their own privacy [to scream], but it’s really difficult to achieve,” she explained.

However, the final model would hopefully not emit any sound – meaning it could be used in office blocks for workers to let off steam after particularly stressful meetings.

Another idea would be to use the booth as part of a mental health-themed art exhibition.

Screams inside the Time Booth – which has a sound recorder – may form part of the exhibition, being smoothed out and played simultaneously in one go.

Whatever the plans for the unusual box, it seemed to have been popular with the crowd outside the Tate on Saturday afternoon.

Despite attracting some unusual looks, those who tried it while the News was there overwhelmingly seemed to enjoy it.

“I feel so much better, I really needed that!” laughed one woman.