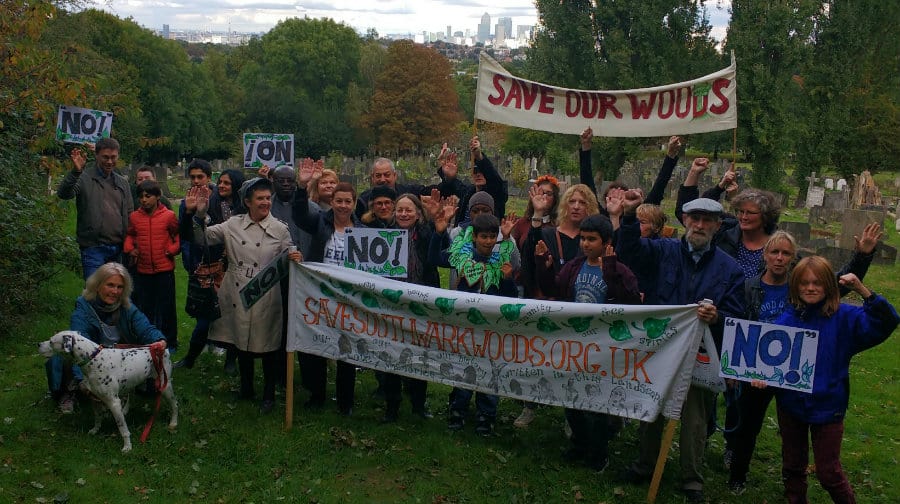 Save Southwark Woods campaigners rally at One Tree Hill

Residents are against proposals to create 2,000 new burial spaces in Honor Oak Park, a survey commissioned by Southwark Council has found.

The survey of 445 people showed that 82 per cent disliked “all elements” of the proposals.

Of the 445 respondents, 296 identified themselves as Southwark or Lewisham residents, and from that number, 76 per cent said they disliked the entire proposal.

From the 82 per cent who gave negative feedback on the council’s plans, 33 per cent said the park should not be used for any new burial spaces at all; 37 per cent say it should be developed into a green space, while 35 per cent say there should be more community amenities.

The results have been seized on by the Save Southwark Woods campaign, whose main criticism of the council’s entire cemetery scheme centre around deforestation and loss of biodiversity.

Councillor Ian Wingfield, Southwark Council’s cabinet member for environment and public realm, said: “We’re aware that there is strong support in the community for Area B to be developed into a green space.

“Whilst we share the community’s desire to enhance the environment, we also have to take into consideration the great number of residents who wish to be buried locally. Given this challenge, we’ve reviewed the options for the site and now have a set of new design options that enhances the ecological value of the area and allows us to continue provide burials.”

Save Southwark Woods Supporters held a rally at One Tree Hill on Sunday after the survey findings were published last week.

Nunhead resident Lewis Schaffer told the News: “We had about 35 people show up and it was on short notice. It was a protest to let people know what’s going on, and that we are against it.

“Over 10,000 people who have signed a petition to say they oppose what the council is doing to the cemeteries, and 800 people wrote to object to it getting planning permission.

“We had the vicar of Nunhead come by, and there was a man from Sweden who comes to the cemetery to see his Irish mother-in-law’s grave. They need to consult more widely and they need to be honest with people about what they are doing to create this new burial space. They can’t just mound over old graves and put new dead people over old dead people.”