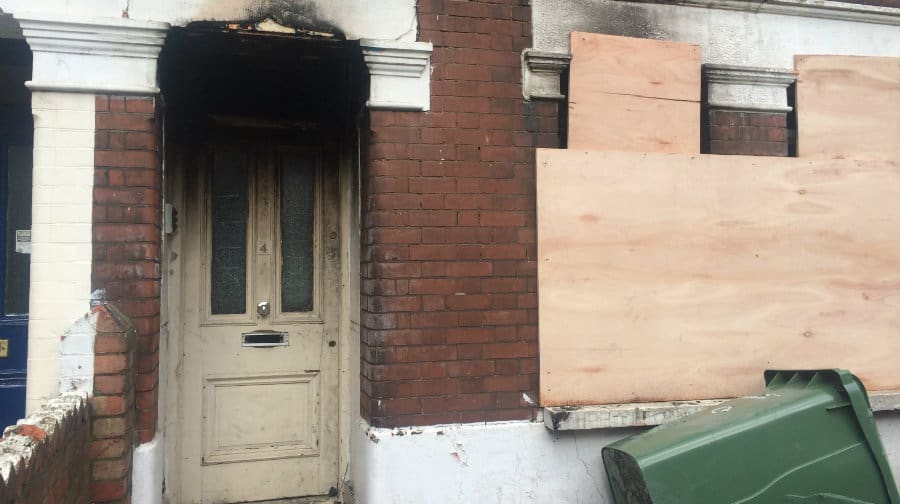 The damaged ground floor of the Northlands Street building

Police are investigating a suspected arson attack in Camberwell, after several people were injured when they were forced to throw themselves out of a second floor window to escape a fire.

The blaze in Northlands Street occurred at around 4.30am and devastated three storeys and the roof of a terraced house. A man in his forties has been arrested.

Five people were treated in hospital for what police described as “fall-related injuries.” Four have since been discharged. They are believed to have jumped from a second storey window in order to flee the blaze and are described as being in a “serious but stable condition.”

Others injured their hands and feet on broken glass, while another man reportedly shimmied down a drain pipe to escape the inferno.

A resident of the neighbouring flat, who only wished to be identified as Chris, told the News: “I heard a bang when some of them crashed their way out of the ground floor window. I think others were jumping out the second floor window. The flames were f*****g huge.

“I was evacuated down the street and we watched what was happening. I was watching the fire and a little bit worried about it spreading to my home but it didn’t really cross my mind, I was mostly worried about the people inside.”

The house is now borded up, with extensive smoke damage to the front door and windows. Dented and broken wheelie bins lie on their sides in the front garden, suggesting they may have been used to break the fall of people jumping from the building.

A police spokesperson said: “One man, aged in his forties, has been arrested in connection with this incident. This fire is being treated as arson by police. Enquiries continue.”

The man was bailed without charge, with a return date is yet to be set.

Six fire engines and 35 firefighters spent four hours battling the blaze before finally bringing it under control at 8.49am, by which point it had “almost entirely damaged” the ground and second floor and caused “severe damage” to the first floor and roof.

A spokesperson for the Fire Brigade said: “There were no working smoke alarms in the property. Everyone should have at least one smoke alarm on every level of your home and the safest option is have those linked together.

“This will give the earliest warning if there is a fire in your home.”

Police are appealing for witnesses. Do you know anything about the incident? Call police on 101 or Crimestoppers anonymously on 0800 555 111.