The revised masterplan went on show to the public for the first time on Friday, May 5 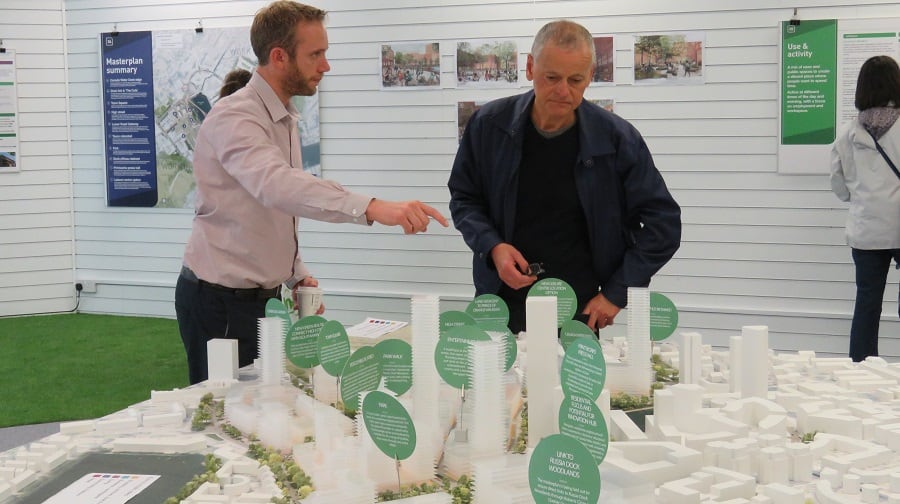 British Land’s revised Canada Water Masterplan confirms that the new leisure centre set to replace Seven Islands will have a shorter pool than the current one.

The masterplan is expected to deliver a new town centre with mixed-use developments and a high street connecting Surrey Quays and Canada Water stations.

It will also see a new leisure centre built to replace Seven Islands on Lower Road, in Rotherhithe, if plans are given the go ahead.

The revised masterplan went on show to the public for the first time on Friday, May 5.

The plans show the new leisure centre will include an eight-lane, 25-metre swimming pool – which is shorter than the current six-lane, 33-metre pool at Seven Islands.

An artist impression of the new town square

Three locations have been identified for the leisure centre, with the former ‘Plot 6’ location no longer being considered following feedback received during a public consultation in 2016.

The first option would see the leisure centre face onto a new pocket park. The entrance would be onto a new Dock Office courtyard, less than a two-minute walk from Canada Water Station.

The second option is a site near the top of the new high street. It would be close to the former Plot 6 site, but would retain the green area that last year’s consultation feedback showed to be important to the local community.

There is expected to be about two million sq ft of office and workspace, up to 3,500 new homes and about one million sq ft of retail, leisure, entertainment and community space set in a network of streets and spaces connected to the wider area.

Revised plans include buildings of varying heights, from a number of ‘landmark buildings’ towering up to 50 storeys in height, to ‘low’ buildings of up to five storeys.

An artist impression of the new high street

British Land has proposed to target 35 per cent of the scheme’s residential properties as affordable homes.

It is proposed that a new Tesco store of a similar size would be built, with residential property on top, and timed in a way that would allow uninterrupted trading and customer service.

The completed scheme is expected to provide up to 20,000 jobs, and about1,800 full-time equivalent roles in construction would be generated over the development period.

The development would be built in several phases over the course of about fifteen to 20 years.

The plans are expected to be submitted to the council by the end of 2017 and building work would start in early 2019 if approved.

The updated masterplan, including a model, will be on display at the Canada Water Masterplan hub, opposite Tesco in Surrey Quays Shopping Centre, on May 13 from 10am-4pm.

Neighbourhood mini exhibitions will be at:

For further information on the masterplan, visit: www.canadawatermasterplan.com

How residents reacted to the revised plans:

Mandy Cooper-Walters, 51, who has lived in Rotherhithe for about fifteen years, said she was concerned about the density of the area.

“This is the first time I’ve actually seen the plans and I’ve been blown away by it,” she said.

“I didn’t realise there were going to be so many tower blocks – I’d be happy if they took some out.

“It’s nice that it’s being regenerated and being put to good use but I think the density of it is just a little bit too much.

“It’s a massive concentration of a lot of people in one area and it’s the pressure on the facilities: it will be interesting to see how much the council will put into the schools in the area.”

“Also, the swimming pool is not as long,” Mrs Cooper-Walters added.

A 40-year-old man, who has lived between south Bermondsey and Surrey Quays Station for more than two years, said he hoped it would bring more nightlife to the area.

“It’s going to bring a little bit more to the area – at the moment it’s a little bit lacking,” said the man, who wished to remain anonymous.

“I think it will bring more nightlife and I would like it to be dedicated more to shopping and commercial space.”

Adam Gyenes, 47, who has lived in Canada Water on and off for fifteen years, said he wanted to see British Land start to build something – but that they would have to get the balance right.

“It’s encouraging,” he said. “I’ve seen lots of consultations in the past so it will be good to see something actually physically appearing.

“I like the park area and the fact there’s more green space proposed and also the area needs restaurants and bars because at the moment a lot of people are moving in and have to go out of the area to enjoy the facilities.

“Provided that they get the balance right between green space, urban area, buildings and infrastructure and it isn’t focused just on business and making money then it’s all positive.

“This time it looks like things are going to happen.”

I agree that with so many tower blocks and up to 50 storeys it is too much! Don’t we have protected views across to the river? The masterplan has yet to agree with TfL how extra transport can fit into the area as we know Jamaica and Lower Roads already have traffic jam problems. The new walkway being considered across Canada Dock will just encourage litter to be thrown in maybe preferable to have another viewing platform instead.