Results Day: Has Kingsdale School produced the country’s top performing GCSE student for the fifth year in a row?

Phenomenal Freddie has achieved ten Grade 9s, one A**,  two A*s and a Grade 8 in his exams. 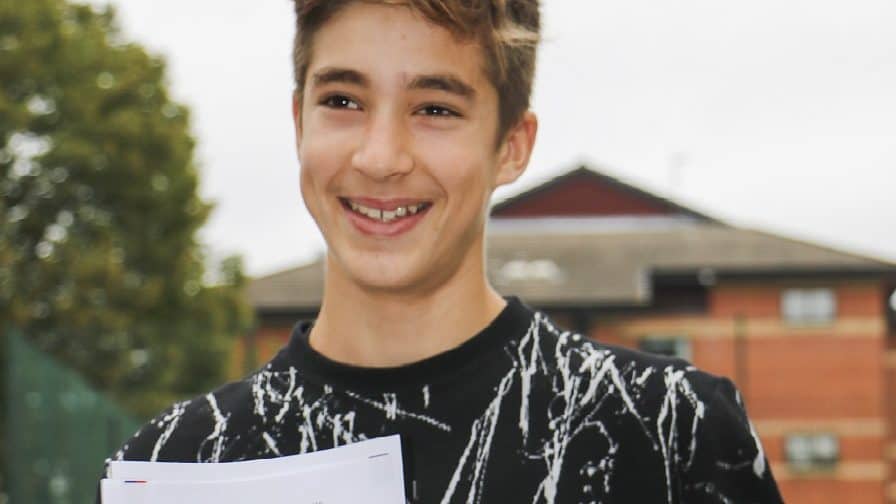 A Kingsdale student has set what teachers describe as an ‘unbelievable record’ with his sweep of fantastic GCSE results – which are equivalent to FOURTEEN A*s or better under the old grading system.

Frederick Mitchell, known as Freddie, was awarded ten Grade 9s, one A**,  two A*s and a Grade 8 in his exams.

His Grade 8 in Spanish has been sent off for a remark in the hope that he may yet achieve a clean sweep of top grades.

Freddie’s teachers believe the fantastic results are likely to set a national record – and say they’d be surprised if it could be bettered in the near future.

This could mean that the school has produced the country’s top performing GCSE student for five years in a row.

Freddie said, “Honestly, I’m speechless.  It’s a sensational feeling but I was not expecting these results.

“I tried my hardest and it has paid off!

“The academic and emotional support from my parents and the school has without doubt contributed to my achievements.

“Thank you all for your help!” Freddie and his parents

Freddie’s proud parents said, “We knew that he would do well but we did not know he would do this well.

“Freddie has always enjoyed working but here he fell in love with studying.

“Kingsdale has really inspired him.

“Freddie clicked with Kingsdale in Year Six and his instinct has proved to be true.”

The school says more than ten students achieved four or more Grade 9s, and provisional results show that approximately 80 per cent of students were awarded a good pass in both English and maths.

Southwark NewsNewsResults Day: Has Kingsdale School produced the country’s top performing GCSE student for the fifth year in a row?