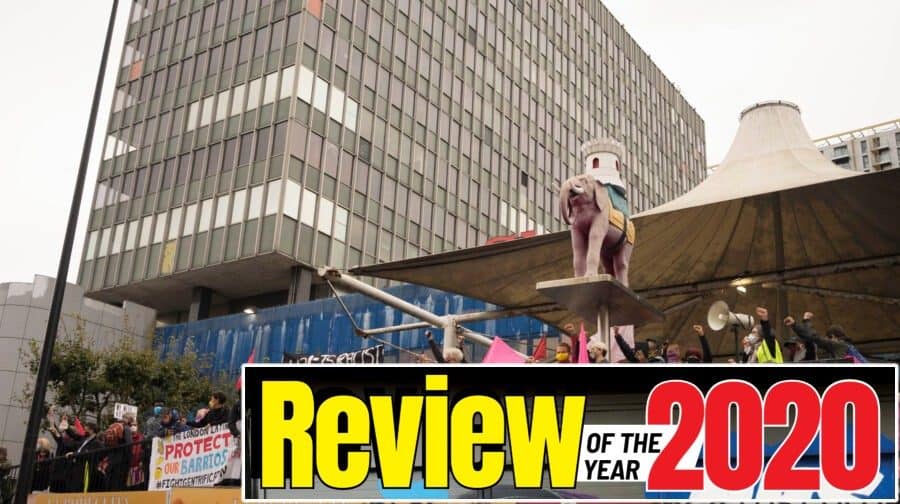 One unforeseen consequence of Coronavirus has been the sharp focus it gave to longstanding housing and overcrowding issues in Southwark.

In June we reported that QR4, a contested new council office block opposite Queens Road station that residents had campaigned against for several years, could be scrapped due to the move to working from home and the virus’ impact on Tooley Street’s budget.

The housing cabinet member at the time – Kieron Williams – said:  “Given the huge impact of COVID-19 on our communities and the council, it is right that we pause to reconsider how best we can deliver essential services to residents in safe and welcoming surroundings. “We will be looking at other options for the Queens Road site and will continue to work with residents to develop any new proposals.”

In October, the scheme was officially scrapped, with plans currently in favour of a new housing development instead.

The pandemic also saw Elephant and Castle shopping centre stay open well beyond its initial closing date. The iconic building was eventually shut for good in September, despite continuing protests.

Throughout the year, bitterness between developer Delancey and campaigners has shown no signs of abating. In the lead-up to the centre’s final day, Delancey issued an extraordinary statement claiming lobbying groups were misrepresenting the number of traders without relocation options.

Then, just as contractors were beginning to decommission and make the site ready for the first stages of demolition, Jerry Flynn from the 35% campaign received the news his application to appeal the regeneration scheme’s planning permission – previously rejected by a High Court – had been granted for March 2021.

Meanwhile, on the Ledbury Estate a decision to fully refurbish rather than demolish and rebuild the towers, made in 2018, had to be revisited after further problems came to light during intensive structural surveys.

A poll in November showed a majority of residents now back fully demolishing and rebuilding all four towers due to the extent of work required and its cost.  A final ballot is due to be held in March 2021.

2020 saw Southwark Council bought up an extra 280 homes on package A of the Aylesbury regeneration for social housing, and in July, and publish its new ‘social regeneration charter’, dubbed the ten commandments, for Old Kent Road.

In February, Grovesnor’s Biscuit Factory scheme in Bermondsey was approved after an increase in affordable housing. Work has already begun on the £550m scheme.

Meanwhile, In November, a legal bid to overturn the £3.3 billion Canada Water Masterplan was thrown out of court, after being approved by the planning committee in September despite overcrowding fears.