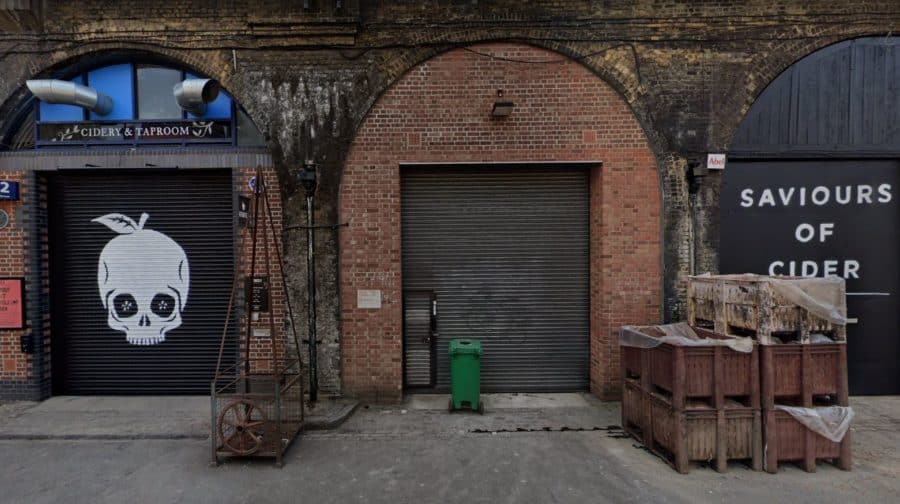 Hawkes Cidery and Taproom was one of two businesses having its licenses reviewed (pictured) alongside nearby The Barrel Project (Image: Google Maps)

Two Bermondsey Beer Mile businesses have had the terms of their alcohol licences reviewed following allegations of antisocial behaviour from their punters – including late night swearing, vomiting in public and littering.

Fed-up residents of Bermondsey’s Arnold Estate, on Druid Street, applied for a successful review of the alcohol licences for the popular Hawkes Cidery and Taproom and nearby craft beer joint, The Barrel Project.

Now the two businesses must either individually or jointly employ a street warden between 6pm to 11.30pm on Fridays in a bid to cut-down on drunken noise and disruption.

“My sleep times are pushed out to accommodate transient visitors to the area who urinate in our street, leave their rubbish and pizza crusts and vomit behind, whilst they go home in their cabs before repeating the cycle the next weekend,” one resident who also chairs the Arnold Estate TRA told councillors in a submission to a Licensing Sub-Committee meeting earlier this month.

The cumulative impact of the breweries on the popular mile meant the resident had to take their children out during peak noise times – and couldn’t even have the windows open on hot days, she said.

Liberal Democrat ward councillor, Humaira Ali, who backed residents’ bid for a review, said she was disappointed that further conditions had not been attached to the businesses by the committee.

“I don’t feel my residents’ voices were heard, and whilst the complexity surrounding the law puts the committee in a difficult position, they could have tightened the conditions,” she said.

A spokesperson for the Barrel Project said: “We are very proud to be part of the Bermondsey community and we are very much aware of the proximity of our neighbours and the impact that antisocial behaviour can have on their lives.

“As a result we put forward the suggestion that we would impose the use of a street marshal on Druid Street at busy times to combat any antisocial behaviour.”

The marshal was introduced last week, he said, and a local business association, Bermondsey Market and Makers, would work to address issues of antisocial behaviour.

It comes after the council won a legal battle brought by the Southwark Brewing Company, also on Druid Street, in April over concern about the impact of noise and disruption to residents of the nearby St John’s Estate.

The beer-mile business had sought to increase its opening hours to serve alcohol until midnight on Fridays and Saturdays, plus twenty minutes ‘drinking up’ time.

But District Judge Susan Holdham rejected the bid, saying the additional hours and the cumulative impact of seventeen businesses within 100m having alcohol licenses would cause too much disruption for local residents.

However, she added in her ruling that the decision was not a reflection upon the business or how it was run.

Hawkes Cidery and Tap Room had not responded to a request for comment as the News went to publication.