REVIEW OF THE YEAR: Southwark News pick of front page stories in 2018

As 2019 begins, the Southwark News takes a look back on our pick of the front pages of 2018 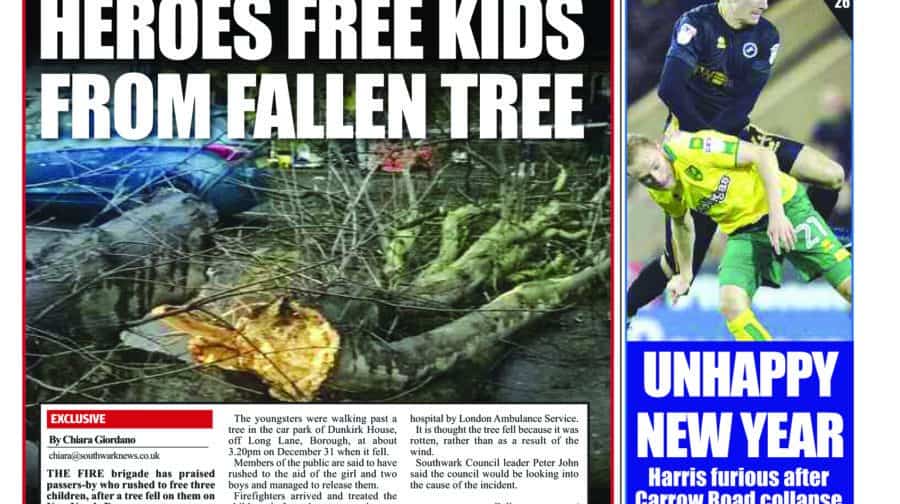 JANUARY: Heroic passers-by staged a daring rescue of three children from under a fallen tree in Borough.

The youngsters – a girl and two boys – were walking past a tree in the car park of Dunkirk House, off Long Lane, on New Year’s Eve when it fell on them.

It’s thought the tree fell because it was rotten, rather than wind.

The London Fire Brigade praised the quick-thinking pedestrians for their heroic deeds. Isla, currently in Barcelona, is said to be responding well to treatment. Her parents are still fundraising. APRIL: An East Dulwich widow told the News of her devastation after her husband’s ashes were burgled just three weeks after his cremation.

The victim first met her husband at dancing classes in 1954. His ashes had been due to be scattered on a rose tree in the back garden and on his parent’s grave in Honor Oak cemetery.

The pensioner, in her eighties, who did not wish to be named, wasn’t at home when they broke in. MAY: Emotional tributes were paid one year on from the London Bridge terror attack which cost the lives of eight people.

A series of events were held led by Southwark Council and Southwark Cathedral.

Council leader Peter John said: “We hope that all will find comfort and solace in the planned events, remembering those who were lost and also those who suffered both physical and psychological harm.”

READ THE FULL STORY: London Bridge one year on: remembering the innocent victims SEPTEMBER: Food bank volunteer Harry rushed into danger to rescue a family from their burning flat on the Aylesbury Estate.

A woman and her two children escaped the Wendover Block blaze without injuries thanks to his heroic actions.

The London Fire Brigade later said the fire had been caused by an electric hob which had been left switched on, igniting a pan of oil. OCTOBER: A police merger with Lambeth, the World Cup, and even Donald Trump’s presidential visit were just some of the reasons behind disappearing Safer Neighbourhood Officers from Southwark’s streets.

READ THE FULL STORY: ‘Cull of neighbourhood police’: Cuts, merger with Lambeth and even Donald Trump’s visit have resulted in safer neighbourhood teams vanishing from our streets