'I needed more positive role models when I was growing up' 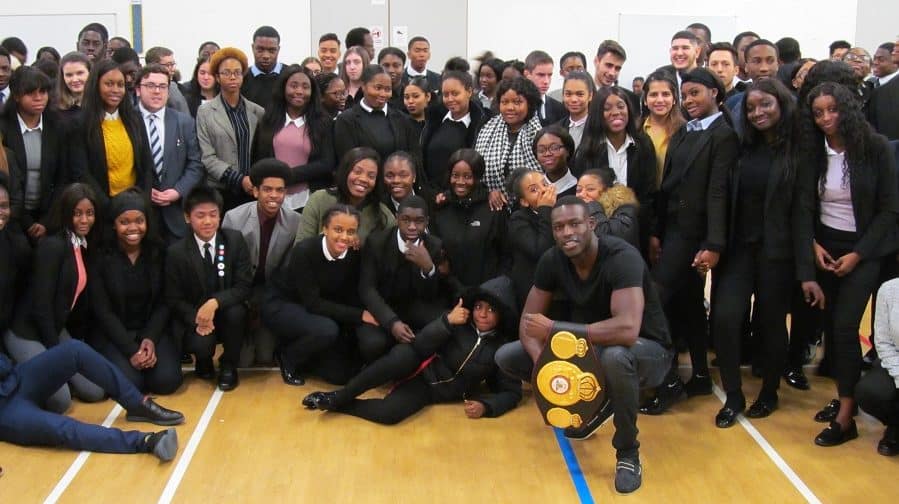 The boxer with students from his former school, Sacred Heart in Camberwell

Professional cruiserweight boxer Richard Riakporhe returned to his former school, Sacred Heart in Camberwell, to meet pupils and give a special boxing class.

Twenty-eight-year-old Riakporhe is unbeaten in eight professional bouts with seven wins via stoppage. During his visit he took his new WBA intercontinental belt with him to show students, won on November 11 in an eighth-round victory against Sam Hyde in Manchester.

Riakporhe joined sixth form students as part of Sacred Heart’s wellbeing week in a special assembly where he talked about his own route into boxing and how the sport has helped his mental as well as physical health, and discussed how important it is to ignore negative influences and instead aim to be positive members of society.

He gave a boxercise class for the whole 6th form and gave a group of particularly keen boxers the chance to be put through their paces one-on-one, saying: “I was really humbled to be able to come in and encourage and hopefully inspire the youth of Sacred Heart school.

“I think it’s really important that a positive agenda needs to be pushed out to young people so we can help change lives, inspire youngsters and create more champions of the future.

“I’ve said before on numerous occasions that I needed more positive role models when I was growing up so I feel this is my calling to do this now, as well as be successful in the sport of boxing.

“I want to motivate and inspire young people and affect the generations to come in positive ways.”

“My plan for the next 12 months is to win more titles.

“Whoever has the belts – I’m coming for them – plain and simple!”

Huge thanks to boxer and former pupil @R_Riakporhe for his visit today with his @WBABoxing belt – inspiring words for 6th form assembly, fun mass boxing class and expert tuition for smaller group of boxers. Plus autographs and kind words for everyone he met. A great role model! pic.twitter.com/K2zXyl7WEv