Crowd gather round van after arrest in East Street Market 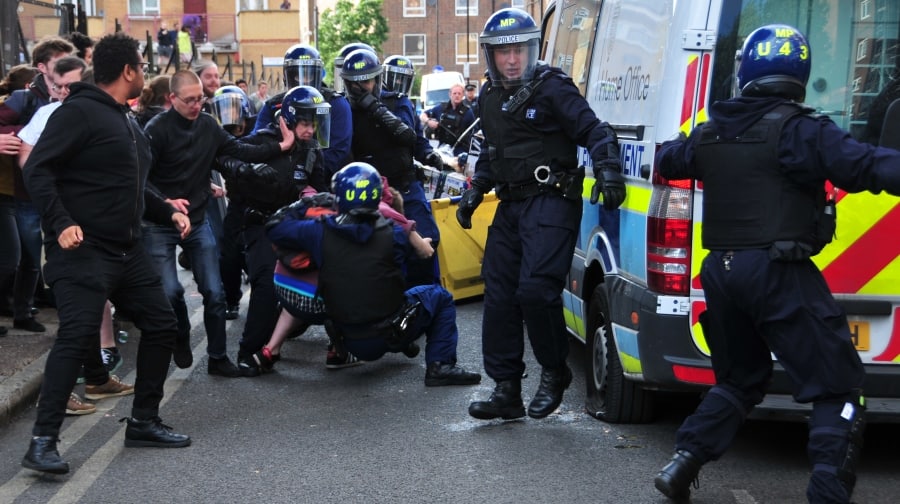 Riot police were called in on Sunday after immigration officers were pelted with eggs, fruit and vegetables when arresting a man for overstaying his visa.

A crowd of more than a hundred people massed around the Home Office van in East Street, which was holding a man who had been arrested at around 5pm.

Eye witnesses said frustration had been building in the area after repeated visits from Immigration Enforcement Officers last week.

After a Pakistani man was led out of AK Fishmongers and put into the van, the massing crowd started grabbing anything to hand, including eggs, fruit and vegetables, and throwing it at the vehicle in protest.

When the van was blockaded by bins and traffic cones, the police were called in for support.

Officers in full riot gear swarmed in and reported they were also hit with bottles and eggs.

One eye witness reported seeing a chair being thrown as the chaos spread into Thurlow Street, and another said they saw a man pick up half a paving stone as a potential projectile.

One officer was knocked unconscious after being “struck by an object thrown from the crowd,” according to a police spokesperson, who added that a police dog was also hurt and was treated at the scene.

An eye witness, who did not wish to be named, claimed it was the other way around and  it was the police who were heavy handed – “literally picking up people and bicycles and flinging them out of the way”  – including a nine-year-old child.

A man was arrested at the scene on suspicion of violent disorder, assault on police, criminal damage and animal cruelty and was taken to a south London police station for questioning.

This follows an incident in Peckham last month when a video captured a skirmish between immigration officers and an angry crowd as they made arrests in Rye Lane. At the time a Home Office spokesperson told the News that they stood by the arrests as they sent “a clear message” to anyone flouting the UK’s immigration laws.

I’m glad i left the area before anything like this happened but knowing the people of walworth there had to have something other then just a snatch and grab with immigration to have caused the riot? the first picture clearly shows a kid being manhandled by the police so why would you believe half of what you are told on a one sided point of view go there and ask they are open honest hardworking people in the area then judge and comment after learning the truth…