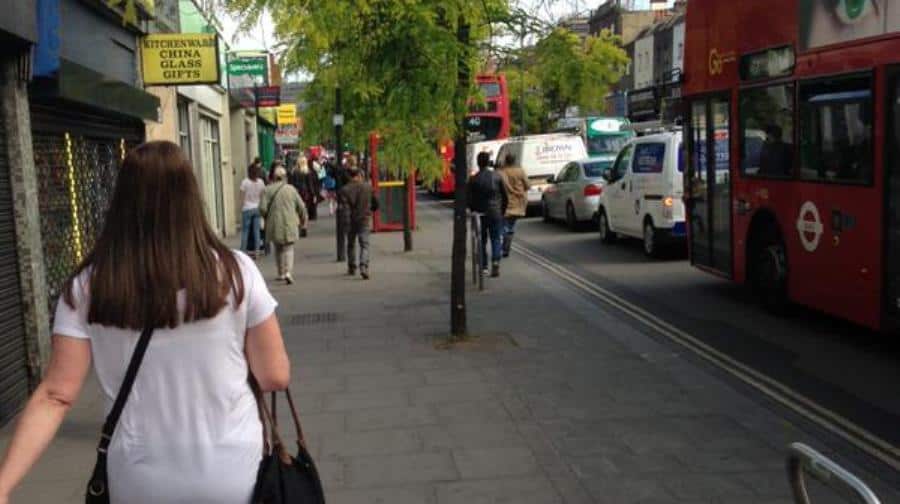 A woman in a medical boot walks past traffic at a standstill. Photo: Beverley Hunt

Frustrated commuters in Walworth faced rush-hour hell this week, with roadworks in Elephant and Castle causing tail-backs and transforming the area into “a car park.”

Bus drivers advised their passengers to get off and walk, with reports of some motorists spending an hour barely moving in Walworth Road. The congestion was due to construction work on the Cycle Superhighway taking place in St George’s Road.

Beverley Hunt told the News: “I walked from Walworth Road to the river with a heavy bag and was quicker than the bus. Most of the buses emptied out apart from those with baggage, babies or difficulty walking.” People also took to social media to express their irritation at the stand-still, which has occurred during both morning and evening rush-hour every day this week, and impacted far down the Old Kent Road and Peckham Park Road.

Fatema Ahmed said on Twitter: “Don’t even think of getting a bus down the Walworth Road to Elephant. I’ve walked past 20 already and there are more in front.”

Another user, Peter Walker, Tweeted: “Walworth Road a complete standstill this morning. A car park. Only things moving were bikes. Seems like a vision of the future.”

Transport for London has not been able to confirm how long the traffic turmoil will continue, with Leon Daniels, the organisation’s Managing Director of Surface Transport, merely advising road users to ‘avoid hotspots’.

He said: “Our £4bn Road Modernisation Plan is creating a greener, safer and more attractive London, including a radical improvement in conditions for cyclists. However, just like with the recent upgrades on the Underground, Londoners will find that there are more modernisation projects underway that affect their journeys.”

I’m so sick of stupid cyclists. They seem to think they’re saving the world by pedalling along in their vile lycra. The people who have to travel by bus are the ones who suffer the most from London’s overcrowded streets.

Problem is that the lights at the elephant only let 3 cars through at a time – whereas coming from Kennington they let about 23 through – although the gridlock through to next round about will not help much either.