Robber, who handed note to betting shops saying “give me the money – or I will blow your ******* head off” is jailed via Skype 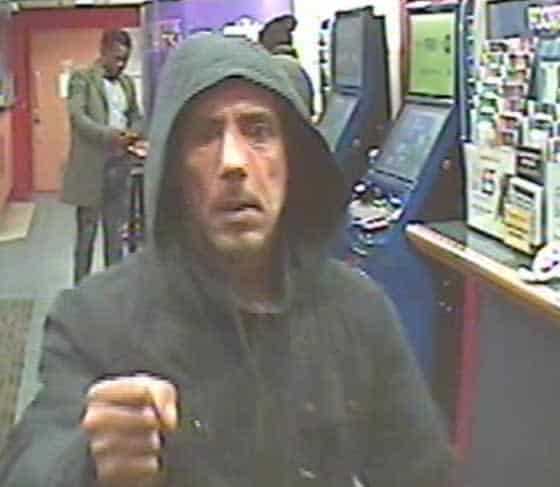 A man that robbed and attempted to rob betting shops by giving cashiers a hand written notes saying “give me the money – or I will blow your ******* head off “, was jailed yesterday (Wednesday, April 22).

Appearing before Croydon Crown Court via Skype Kenneth Brown, 53, of no fixed address, pleaded guilty to two counts of attempted robbery, and one count of robbery at betting shops in New Cross.

He was jailed for a total of four years and eight months. Brown first robbed a betting shop in New Cross Road, on March 11. He entered the shop at around 6.45pm, and handed the cashier a handwritten note which said ““give me the money – or I will blow your ******* head off”.

The court heard that Brown also had his right hand in his pocket and was pointing it at the member of staff – intimating that he had a gun or weapon.

He made off with a small amount of cash.

Brown returned to the same betting shop  six days later  (March 17)  just after 7pm and verbally demanded money, again intimating that he had a weapon in his pocket.

But this time the member of staff activated the emergency button and Brown left the shop empty-handed.

Around ten minutes later, he entered a different bookmakers on the same road and, similar to the first offence, handed a note to the person behind the counter demanding money and making threats, the court was told.

The two staff members escaped to the back office and Brown left the store. Police were called. Armed officers attended and they were given a suspect description. Within 20 minutes of the offence happening, after a brief area search officers located Brown. He was arrested and taken into custody.

Brown was charged on Tuesday, 24 March. He first appeared at Bromley Magistrates’ Court on Wednesday, 25 March.

Detective Constable Dennis Valdez, from the Met’s Flying Squad, said: “These were terrifying incidents for the workers who were threatened by Brown.

“Armed officers were at the scene of the final robbery attempt within minutes. Brown was located in the area and detained very quickly, and he was linked to the previous robbery offences shortly after. The seriousness of the offences is reflected in the custodial sentences handed down.”

Southwark NewsNewsRobber, who handed note to betting shops saying “give me the money – or I will blow your ******* head off” is jailed via Skype