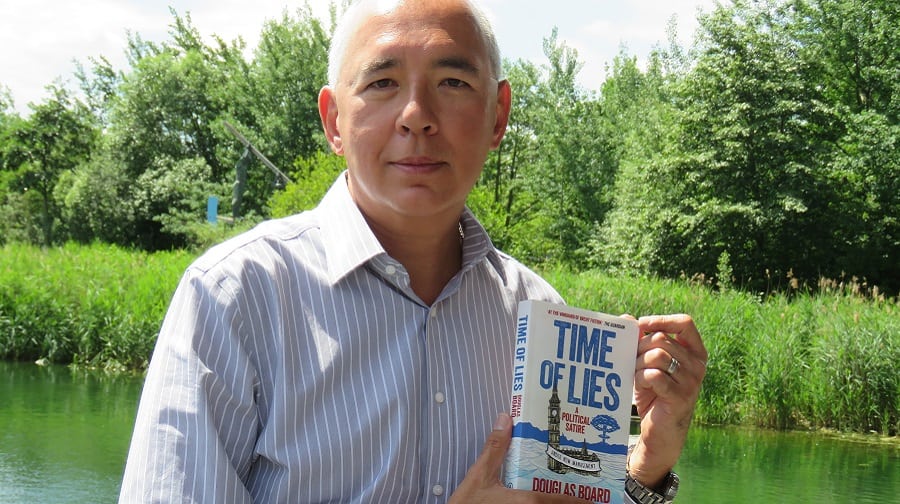 An author has penned a political satire based in Bermondsey, which tells the story of a Millwall supporter poised to become the next prime minister.

Douglas Board’s second novel A Time of Lies tells the story of a post-Brexit Britain which is about to get its own Donald Trump in the form of Lions-loving Bob Grant.

Set in the near future in 2020, Board explores the social divide between the traditional ruling class and the ruled – and what would happen if each stepped into the other’s shoes.

“What I’m trying to do is help us have a feeling of what it might have been like to be someone else,” said Board, who lives near Greenland Dock.

“The novel is about two brothers who are born and grow up in Bermondsey who are pretty similar except one, Zack, is kind of the more thoughtful one and he manages to get into South Bank University and studies drama, but doesn’t get that good a degree.

“We catch him a few years on and he’s done university but hasn’t turned out to be fantastic and his younger brother, Bob, is confident and cocky and didn’t go to university but made money in business and is now poised to be Britain’s prime minister.

“Zack can’t believe that this person he thinks of as a thoughtless, drunken, yobbo Millwall supporter is now going to be prime minister.”

Board draws on his own personal experience of working with senior figures as a head-hunter, as well as living and drinking in Bermondsey and Rotherhithe.

“This book doesn’t just come from having been lucky enough to learn something from working with people like the chief executive of the NHS, but also from people here who were open enough to say ‘he’s a bit of a strange guy’ but befriend me,” he said.

“There used to be a pub called the Prince of Wales and I think I must have been the only person in a suit and tie who walked in there often about 9/10 o’ clock at night.

“If there was a big football match on I would sit on the bench directly under the screen and I was the only person not watching the match.

“People must’ve thought ‘how strange is this guy, what is he doing in here’ but gradually I think they realised I was alright and in the Wibbley Wobbley particularly people befriended me.”

The author, who grew up in Hong Kong and moved to London while studying for his A-levels, said he also wanted to connect Millwall and Eton as “two very powerful symbols of class divide” in Times of Lies.

“Bob, who’s hoping to become prime minister, does his final big rally in the Den, Millwall’s stadium,” he said.

He began writing the novel in 2013 – long before the EU referendum result was known – but said he was already concerned about the political state of many countries.

“Lots of resident countries have caused this kind of big gulf of ignorance and contempt between the ruling class and ruled – this is what worries me and it started worrying me long before Brexit,” said Board, whose wife grew up on the Aylton Estate, in Rotherhithe.

“You see that contempt when people say ‘and who are these experts’ but also you see it the other way round when the people who are used to running all the institutions of the country if they see any chance that someone who isn’t one of them who maybe didn’t go to university might actually get the top job and run things for the country, they’re shocked by it.”

“In the first version of the book I had some more farcical things: I didn’t think Trump was going to be elected, so I had him abducted by aliens – but of course he got elected so that had to change,” he added.

“It’s not sentimental or romantic; it’s not saying everything is alright in southeast London because it’s not, but I hope it’s presenting something the community will be proud of,” he said.

Time of Lies is dedicated to Jo Cox, the Labour MP who was fatally shot and stabbed in her Yorkshire constituency of Batley and Spen in June last year.

It will be published in paperback on June 23 and can be bought for £8.99 online from Amazon and at most book stores.

Watch Douglas Board talk about A Time of Lies