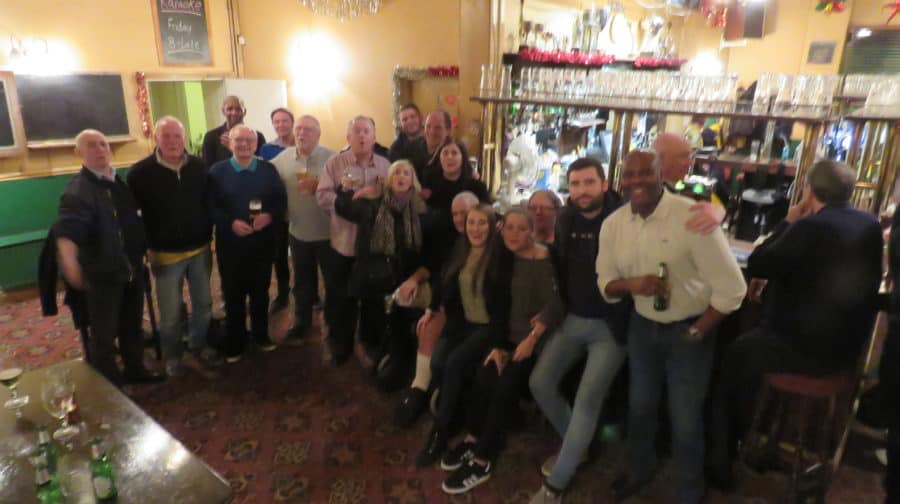 Friends, family and pub regulars on the China Hall's last night after losing a battle to stay open in January which left Mick and Linda with hefty legal bills

The long-standing publicans of Rotherhithe’s China Hall closed their doors on Tuesday night – marking the end of a thirty-five years stint serving pints to the local community.

As the News reported in December, landlords Michael and Linda Norris had faced the prospect of being turfed out of their business and their flat upstairs on Christmas Eve, after the developer Hamna Wakaf Ltd took over the site’s lease.

Regular customers, friends and family gathered to raise a glass, bidding farewell to the traditional boozer on Lower Road and to see off the landlords, thought to be the longest-serving in the borough.

Landlord Mick, 70, told the News: “It’s the end of an era for us.” Linda added: “It’s quite overwhelming, really.” The couple were involved in a costly court battle with the developer, after it obtained the freehold from Punch Taverns and offered the couple a lease that was double the amount they were previously paying.

“We had to give the fight up because of the money”, said Linda. “They tried to make it as hard for us as possible. It was very hard because we never saw them and it’s all done through solicitors.”

Husband Mick also had to have his leg amputated last year, making it even more difficult for the couple to battle to keep their home and business.

However, the family had to negotiate with the developers over the festive period to not be made homeless on Christmas Eve. Michael and Linda Norris, who were landlords of the China Hall for 35 years, are thought to be the longest serving in the borough

Linda said: “It was going to be Christmas Eve, then Simon Hughes asked if we could stay until January 7.

“But then it turned out the builders weren’t handing over the keys [to their new home] until the 17th.”

The News could not find contact details for Hamna Wakaf Ltd, based on the Isle of Man, to ask them for comment.

The move from Rotherhithe – where Mick and Linda were both born – will be challenging, they said, as they are not familiar with Camberwell.

Michael said: “It’s going to be really weird being somewhere else.”

Paying tribute to the publicans, former MP Simon Hughes said: “I think I’m right in saying that they are the longest serving family looking after any pub in the borough.

“We owe them lots more than we could ever give back.”

Toni-Marie, who has worked at the pub for nearly four years, said: “You won’t find another old school pub like this one.”

The 25-year-old added: “This is my second home. They [Mick and Linda] have helped me so much, and God knows how much they’ve helped other people. They’re the greatest family I’ve ever met.”

The south-east London branch of Campaign for Real Ale (CAMRA) has previously successfully campaigned for the site to be listed as an “asset of community value” which would have to be considered in a future planning application.

However the future of the historic site, where a pub has been for nearly 300 years, is not yet clear.