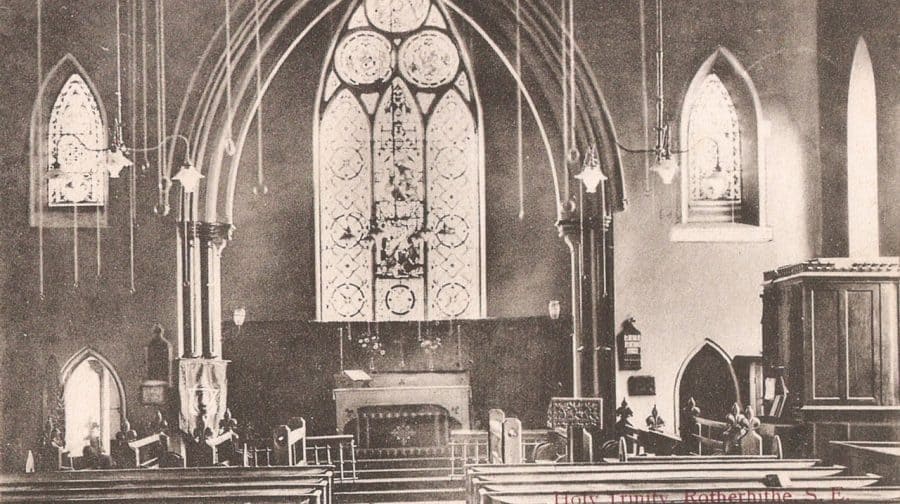 A charred crucifix found in the ruins of a Rotherhithe church will hang over a Blitz commemoration ceremony this evening – the only thing remaining from the original building after it was bombed.

Tonight’s ceremony at the Holy Trinity Rotherhithe will remember the effect of the bombing raid which leveled the church and much of the surrounding area on September 7 1940, the first night of the Blitz.

The cross was returned to the church by a man came to confess for ‘stealing’ it by finding it in the ruins as a boy. Father Andrew Doyle, who has been at the Bryan Road church for twenty years, said: “One day a crucifix turned up, from a lady called Daisy Simmonds but she wouldn’t tell me who’d found it.

“One night a few weeks after that an old man turned up at the door to say he was the ‘thief’.

“Because he thought the police were after him, so he said ‘I’ve come to confess, it was me I took your cross.’

“It took me ages to convince him he was my hero. He found it, kept it safe for all those years when no-one else would’ve done and he returned it.”

The cross returned by local George Ray, who has since passed away, is the only thing that survives of the original church.

Father Doyle said: “Odd I suppose that the first church to fall down on the first day of the Blitz and the first thing to come back to us was a really charred crucifix.

“There must be candlesticks out in the community but we haven’t seen any of those.”

Father Doyle oversaw George’s funeral when he passed away. The object, which bares scorch marks from the intense heat of the bombing is not the only link to WW2 to be found in the church, which was rebuilt in 1959.

The vicar explained: “The main painting at the back of the church is by a man called Hans Feibusch, a German Jew who managed to get out in 1936 and was looked after the country during the war years.

“He went around painting in the churches that had been destroyed.”

The painter completed around forty murals, including the one on the eastern wall at St Rotherhithe’s, before his eyesight failed him.