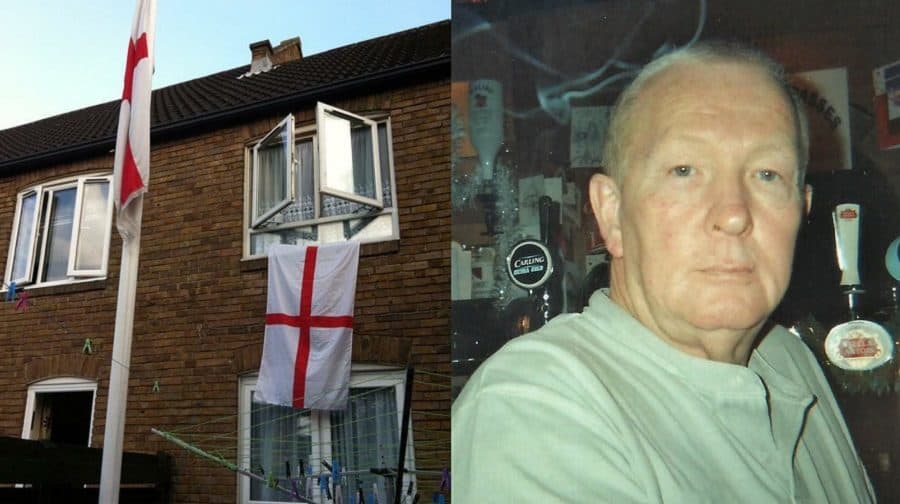 A Rotherhithe resident was allegedly told she could not fly her St George’s flag by Southwark Council – and to remove her flagpole, too.

The flag had flown in Linda Donovan’s back-garden for 22 years after being installed by her late husband Peter.

But Mrs Donovan says she was told to remove it by a council officer after a neighbour’s complaint in October, because it could only be flown for special sporting occasions.

And according to a letter sent to the 66-year-old by council officials, the flagpole too must come down because it is 22-feet high, which is above a fifteen foot limit. The flags at the Donovans’ home

“I feel awful because I feel like I’ve let my husband down,” said Linda. “I’ll take the flagpole down to fifteen foot but then it’s going straight back up with the St George’s flag on it.

“The flag had been up there 22 years and Peter got planning permission from the council [at the time] but we can’t find a copy and the council don’t keep records that long.”

Linda’s daughter, Kelly, added: “They said because it was a St George’s flag we can have it up for sporting occasions but we can’t have it up all the time.

“In the end we took it down. It caused a lot of stress to my mum because it was kind of a memory of my dad.” Linda’s late husband Peter, who installed the flags and flagpole

According to the Donovan family, council officials first came around to tell them to take down the flag after a neighbour complained that they did not like it.

After being contacted by the News, the council said it would “review” the decision to take the flagpole down.

“We want to make sure that Ms Donovan and her neighbour are happy with whatever solution is reached,” said Cllr Kieron Williams, who holds the housing portfolio for Southwark.

“We can’t find any record of an original planning consent for the flag pole, but we’re reviewing the decision to take it down, and we’re happy to come to a compromise as per the resident’s suggestion to lower the height slightly if that works for everyone concerned.” The Rotherhithe resident had had until the start of February to take down the height of the pole, at her own cost.

However, defiant Linda said she would be flying the St George’s flag once the flagpole was at its correct height, no matter what.

“There’s no way I’m taking it down,” she said. “They can do what they like, it’s not coming down.”

I bet they fly their flag over the town council offices. She should go to court and challenge the bunch of idiots.
What is this Country coming to?

My motto live and let live, the guy bottom of my
Gardens has two large cb towers in his garden and although not particularly nice to look at which I can’t help doing as his garden runs across
The bottom of mine I would no more complain than cut of arm he’s hurting no one and there are worse things in life,
So tell your neighbour to get a life

In Scotland the Saltire is flown EVERYWHERE. Lots of houses have a flag flying in their gardens & even at the local High school & football pitches. It’s a small town but the people are all very proud of their country. The image of the white cross on a blue background is on mugs T towels, T shirts and and anything you can name.
Nobody complains. Its the national flag. Try flying the Union Jack and see if they can legally stop you flying that. I’m with you.
By the way I just bought a Union Jack, a Saltire, Welsh flat and a Cross of St. George ready for the 31st January. You might like to test whether they can stop you flying it then when there will be literally millions flying in London as well as the United Kingdom.

This England, is every church of England racist?
I have a St George’s flag flying it will continue to do so. You don’t need planning permission if it’s a movable object.

So now we are not allowed to fly our national flag in our own country. These useless jobsworths obviously have no pride in their own nation. With you all the way girl you fly it

This has got to stop! Every English person should have the right to fly their National flag, just as the Scots, Welsh and Northern Irish do. I have never heard of any problems elsewhere in the UK, so why is it always in England? I can’t think of any English person that would complain, so if the council will not divulge who did, we must assume it was someone who is not English, in which case, they should not have the right.

I applaud Linda’s stance in refusing to take the flag down, and to take it further if necessary, she has my full support, and in the meantime maybe we should seek clarification from our government by contacting our MP’s to get this sorted out once and for all. It’s happened too often over the years, and English people will not be bullied! Let Neil Coyle, MP for the area, earn his money by addressing this issue.

I love the way there’s assumption the complainant is ‘not English’. I’d put my bottom dollar on it being a white, British born person that’s complained.

Listen, the flag is found offensive for so many reasons. It’s plastered on the front of shields of the crusaders, that killed millions of people, by the way. It’s used by infantile turds that follow Britain First and other such nationalist, right wing nonsense. It’s championed by football hooligans and is generally seen as a way of telling people you simply don’t like foreigners.

It’s an ugly looking thing anyway, why does anyone need to fly it to be proud of their country, not that we’ve got much to be proud of.

“It’s an ugly looking thing anyway, why does anyone need to fly it”

Its our national flag … John.

your signals are clear John.

There is no need to reduce it’s height – If planning permission is needed this cannot be refused if it has been in place for 7 years.

I don’t care what anyone puts up in their own garden …but I believe we have done a lot to be proud of …that’s why everyone wants to come and settle in this country .for our fantastic public services .our welfare benefits .our education system our right to protest .yes we do have bigots so does every other country in the world …We have always offered safety and protection …if you look up the true meaning of the English flag …white is for peace and the red is for valour …don’t forget that the brave young men and women in the second world war gave their lives for our freedom

You can fly ANY flag you want. I can fly the jolly roger right now and there’s not a thing the council can do about it.
The English flag is NOT only to be flown during special occasions. The government have been very clear on this.

If you don’t like the flag of our country, then get out.