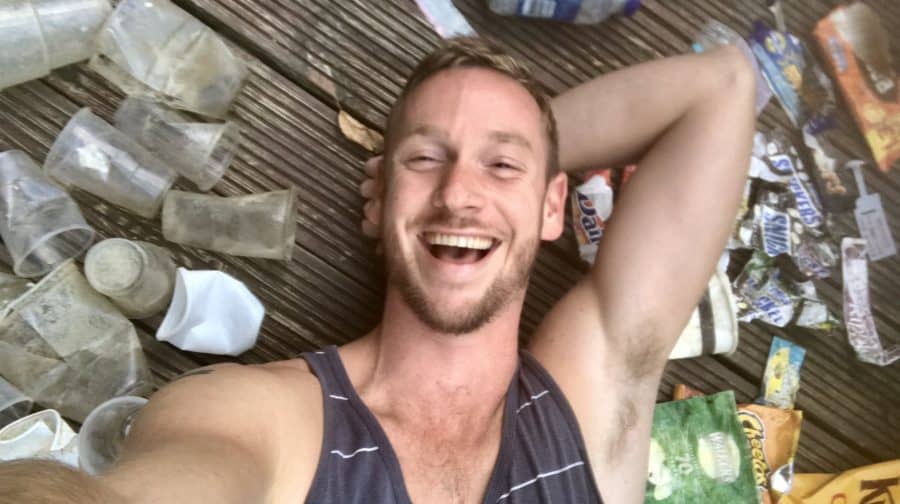 A Rotherhithe man has launched a one man campaign to clean up plastic from the Thames’ beaches, writes Josh Salisbury…

Jonathan Latham, 29, has been picking up litter on his own during walks for three months before setting up a Twitter account to name and shame brands whose plastics regularly wash up on-shore.

The Cathay Road resident was inspired to start the initiative after seeing the amount of plastic waste going into rivers abroad though his work with Save the Children as a tropical disease specialist. Johnathan, aged 29, has been doing litter picks on his own for over three months near his Rotherhithe home

He said: “My specialisation is water sanitation and hygiene – things like cholera and hepatitis which are water transmitted. So I’ve always been really aware of water quality and pollution.

“I live by the water and I have a beer and go for a walk and always see rubbish floating along, but I just couldn’t believe this was happening in central London because I’ve seen it happen in other countries.”

Now the charity worker, who moved to London two years ago, regularly does solo litter picks on the Thames beaches near his home – and then uses social media to name and shame companies not doing enough on plastic waste.

He said: “A lot of people are talking about the consumers being responsible for plastic waste, but in my mind if you want to make an impact you aim for the top.

One person can consume 100 KitKats a year – but if you tell KitKat to stop producing those plastic wrappers, how many hundreds of millions do they produce a year?”

The worst offenders are big food companies such as Cadbury’s, Mars and Nestle, Mr Latham said.

“I pick up about thirty to forty sweet and chocolate wrappers every time I go for a walk,” he added. The environmentally conscious charity worker now hopes others will join him

He said: “Last time I was out I picked up to 500 pieces of litter during a 40 minute walk.

“I find it weird that it’s still happening.”

Following his Twitter campaign tagging prolific producers of plastic – on the account CleanTheThames – other people in the area are now asking to join in with his initiative he says.

He added: “A lot of people have reached out and asked whether I would like some company while I’m out and picking up rubbish so hopefully it’s more than just me in the future.”