It started off with Somewhere Over The Rainbow, in honour of the NHS 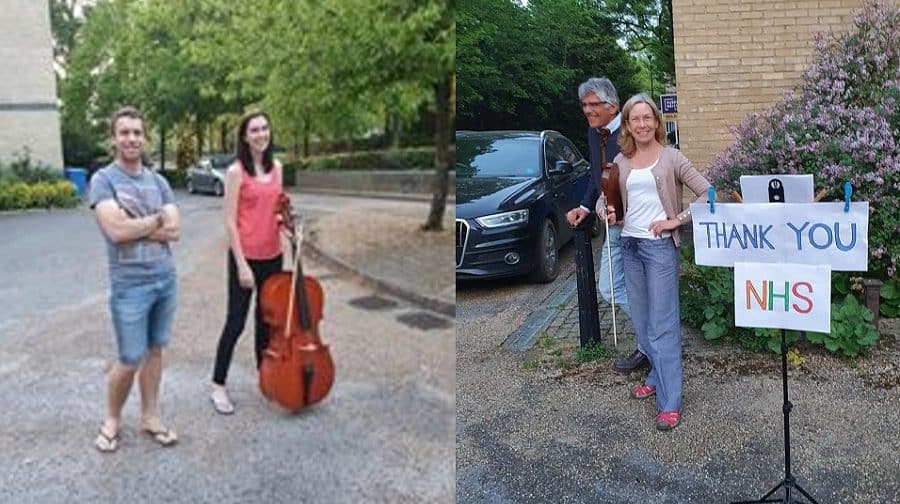 Neighbours in Hurley Crescent during one of their concerts

Neighbours on a Rotherhithe street are performing a weekly concert with each resident playing a different music instrument in a show of solidarity amid the lockdown.

Every Thursday, a group of residents in Hurley Crescent take to the areas outside their front door to play their part in performing a classic.

It began with ‘Somewhere Over the Rainbow’, in honour of the NHS, and has since been followed by Beatles songs such as ‘Yesterday’ and ‘With a Little Help From My Friends.’

Among the nine-strong group of guitarists, violinists, cellists and dummers are even professionals – with two of the residents performing in orchestras as their day job.

It was organised by residents leaning out of their windows to have a chat with each other, said one of those taking part, Paul Hagen. “It was just a group chat, we’ve been having a weekly chat out of the window with our neighbours, it just kind of came out of there really,” he said.

“We found out some of our friends were doing something a bit different, they had put up an arrangement for Somewhere Over The Rainbow, so we did that because the rainbow is for the NHS.”

Reaction to musical ensemble has been overwhelmingly positive since the band of neighbours began three weeks ago, said Paul, who plays the keyboard and drums.

One week, the musicians began ‘Beating Retreat’, the name given to the traditional arrangement played by Army Corps when retreating.

But this was anything but an admission of defeat amid the coronavirus pandemic, said Paul, who has lived on the street for fifteen years. “It doesn’t mean give up. It’s about going to a place of safety,” he said.

“It was mainly done as a morale booster, a bit of community spirit raising,” he added. “It’s a way of getting people to feel that they’re not isolated, they’re not alone and there’s still a lot of community going on.

Looking great Mr &Mrs Fry and everyone sounding amazing. Will be out with saucepan and metal spoon tonight, hoping neighbours will join me again! May not be able to scrape anymore butvIncan still make one hell of a racket ???