“I’m absolutely ecstatic, I cried my eyes out when I found out, I really did," said Linda 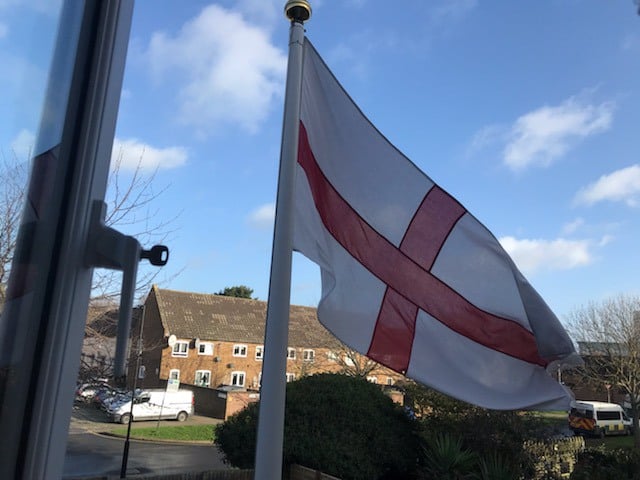 A Rotherhithe resident who was allegedly told to take down her St George’s flag after a neighbour complained is proudly flying it again after a council U-turn.

Linda Donovan, 66, was informed that a flagpole in her back garden, installed by her late husband Peter, was too tall as it breached a fifteen foot limit.

She had also allegedly been told to take down her St George’s flag on the pole by a council officer because it could only be flown for special sporting occasions.

But after her story was featured in the News and sparked a backlash among this paper’s readers, Linda can now fly the flag at its full height. The flagpole was installed by Linda’s late husband, Peter

“I’m absolutely ecstatic, I cried my eyes out when I found out, I really did,” she said. “It was something my husband liked, and it made him feel proud to be British.

“We’ve put the flag pole back up because now we’re allowed to fly it.”

A letter send to the Donovan family by a council official states that “the final height is acceptable.”

Planning officials said they could find no record that permission had ever been granted for the pole, but since it has been up for more than two decades “our planning team have agreed no enforcement will take place on their end.” This reverses a previous decision in which Mrs Donovan was told to take the flagpole down to fifteen feet at her own cost, or face a court injunction following the neighbour’s complaint.

Readers backed Mrs Donovan, with many writing messages of support to the News. Other residents of the Rotherhithe street where she lives have also given their backing for the flag to fly, she says.

“The people who are in there [her neighbour’s tenants] they even came out and gave me a thumbs up,” she said. “They don’t mind at all.”

Good on you Linda
And how lovely to see that flag flying high.
So proudly!