Rotherhithe residents evacuated after fire breaks out in basement 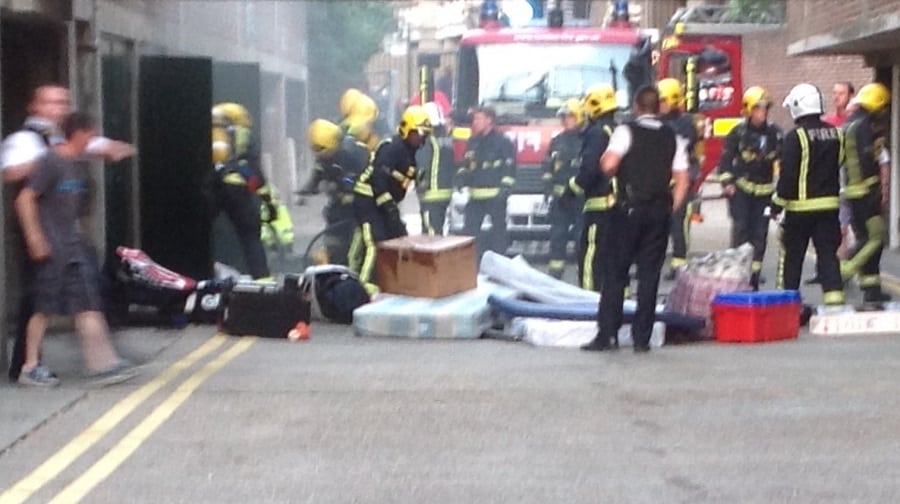 Residents were evacuated to their tenants’ hall after a fire broke out at a five-storey Rotherhithe block.

Six fire engines and about 35 firefighters were called to a blaze in a basement on the Silverlock Estate in Rotherhithe New Road shortly after 8.30pm on July 9.

Around 20 people were evacuated from the building and took refuge in a tenants’ and residents’ association (TRA) hall for three hours before they were allowed back into their homes.

David Eyles, treasurer of Silverlock Hall TRA, and Julie Eyles, secretary, opened the hall for residents before handing out tea and coffee and asking paramedics to tend to people.

Gill Davis, chair of the TRA, told the News “that’s what the community is for”.

“You can’t leave residents out on the street at 11 at night,” she said. “There were young children in their pyjamas when you’ve got a tenants’ hall sitting here waiting.”

Ms David added that it wasn’t the first time a fire had broken out at the block.

“Only a year ago I told our resident services officer that there were two garages wedged open with mattresses and I said ‘it’s a fire waiting to happen’,” she said.

“I know they [the fire brigade] pulled a lot of rubbish and mattresses and God knows what else out of the garage.

“When I came down at 7am today [Monday] everything had been cleared away.”

She also praised Livesey ward councillor Richard Livingstone for attending the scene and staying until residents were allowed back into their homes, as well as council officers who went to see how they could help.

However, the TRA chair said Stephanie Cryan, cabinet member for housing, was asked to attend by a resident, but did not.

Cllr Cryan, who is also deputy leader of the council, did not comment on the claim. However, she said: “We take this matter extremely seriously and the council has been in discussions with residents for some time about this issue.

“We have responded to residents’ concerns by doing our best to seek a solution to the problem by making regular visits with our homeless services, the police and wardens to support anyone we find.

“We have also been doing our best to ensure the garages are secure and well-lit. Long-term, we are looking at permanent solutions such as getting the garages into a decent condition then bringing empty garages back into use.”

A small part of the basement of the building was damaged by fire but there no injuries were reported.

Fire crews from Deptford, Dockhead, New Cross, Greenwich, and Whitechapel fire stations were called to attend the incident at 8.32pm. The fire was under control by 11.09pm.

Southwark NewsNewsRotherhithe residents evacuated after fire breaks out in basement