The group are opposing the plans, claiming that it would be a “loss of history” for the area, as it dates back to the early 1900s 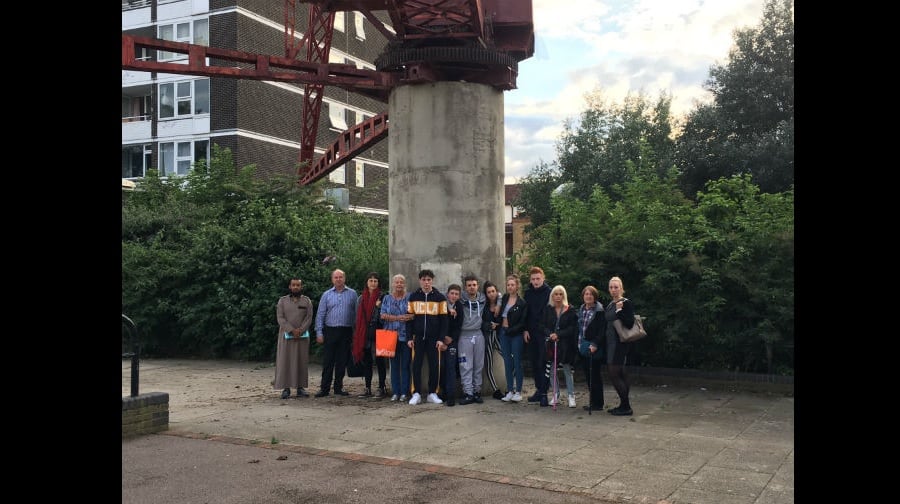 A group of Rotherhithe residents is campaigning to save the old red crane on Odessa Street, after it was confirmed it will be demolished to make way for a housing development.

The proposed development by Hollybrook Homes would see the crane scrapped and recycled as a sculpture by Surrey Docks Farm’s artist Kevin Boys, to sit by the Thames.

The group are opposing the plans, claiming that it would be a “loss of history” for the area, as it dates back to the early 1900s.

Andy Gibson, one of the residents, said that the development would mean the loss of community space too, including a playground, which he said is still used despite its rundown appearance.

The residents have started a petition calling for the crane to be preserved, so far attracting more than 360 signatures.

Hollybrook Homes said that they explored ways to include the crane in the development over the past eighteen months, but due to it falling into disrepair in recent years it wasn’t deemed viable.

Justin Elcombe, managing director of Hollybrook Homes, said: “Unfortunately over many years the condition of the crane has deteriorated to the point that it is beyond repair and has become a health and safety hazard.

“We are therefore proposing that the crane be dismantled and some of the material recycled to create a new public sculpture on the riverfront, to celebrate the maritime and former dockland history of Rotherhithe.

“We are working with local artist Kevin Boys, based at Surrey Docks Farm, whose recent work include the popular sculpture of local World War I hero Albert McKenzie on Tower Bridge Road.

“With regard to the loss of the disused youth club and the concrete ball area, we understand that the council have provided much improved replacement facilities locally at nearby Docklands Settlements.”

There is a detailed condition report objecting to the demolition of the Red Crane from GLIAS (Greater London Industrial Archaeological Society) by Malcolm Tucker on the Planning Portal. This expert evidence flatly contradicts the statement from Hollybrook Homes. The condition of the Crane is very good structurally though there is superficial rusting and cosmetic issues due to the deliberate and planned dereliction of the monument and associated Open Space since it was vested back to the Council from the LDDC in 1997.

When it was handed back less than twenty years ago along with the area rebranded from the Surrey Commercial Docks (SCDs) known as Surrey Quays, this historic area with its notably large areas of public open space, was in a pristine state of repair with refurbished industrial monuments and riverside walks in gleaming black paint. Immaculate brick laid pavements. The Red Crane and associated Swung Brudges in gleaming fresh red paint.

Since then, under Southwark’s lack of respect for the built environment and local heritage, the whole area has sunk. In the case of the Odessa Wharf Open Space, Southwark deliberately and ILLEGALLY evaded its responsibility, which is a statutory duty under the 1906 Act, by not maintaining or even cleaning the children’s games area, the Riverside Walk by the Red Crane and the crane itself.

The section of the Thames Path Riverside Walk that is next to Greenland Dock linking to Randalls Rents (Odessa Wharf Holiday Serviced Apartments) via a wooden jetty that is totten and requires rebuilding, has been boarded up for the past ten years due to Southwark evading its statutory responsibility for this section of the National Trail. And this from a Council that is shouting about its “love” of the riverside and extending the Path if this demolition and planning application gos ahead!

Southwark further lied through its dirty teeth about the Red Crane concerning it being a “Health and Safety” risk. I requested the logs from the FBS (Fire Brigade Service) and London Ambulance Service about Odessa Wharf and the Red Crane. They searched their records and wrote back to me (letters on file) that there have been NO call outs or incidents in their records. So much for respecting the community or the truth!

Please note I copied ALL the comments left by those people who took the time to register their support for my SAVE THE RED CRANE PETITION at change.org carefully deleting people’s names etc, and posted them Recorded Delivery (verified delivered October 9th morning) with my covering letter to Southwark Planning clearly marked FAO of the Committee for the Planning Application. But I have been unable to get any confirmation of receipt from Southwark – who will not discuss on the phone, do not answer emails and duscourage members of the public enquiring in person at their offices in Tooley Street!

I dare say, Southwark Planning’door (or back door) is ALWAYS OPEN to the directors of Hollybrook Homes whose offices are just down the road, ten minutes walk away, in Mill Street Dock Head!

All you supporters of the Crane out there, kiddies games space (rightly FREE to use at ALL times) and just a nice section of the Riverside Walk: all the best and keep up the pressure to the Committee. This campaign is likely to attract wider and deeper attention and support like the Skateboarders on the Southbank. All the best!