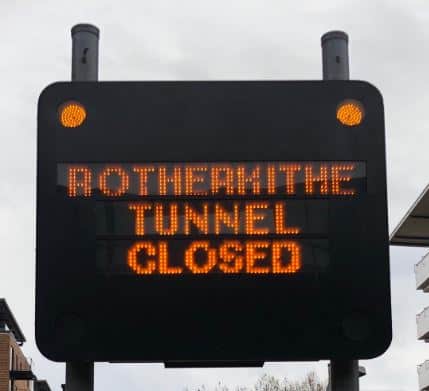 Motorists could face further closures of the Rotherhithe Tunnel, as TfL does not have the funding for major renewals needed on the crossing.

The authority was forced to ask for a government bailout in May, following a collapse in passenger numbers from coronavirus.

A revised budget in July, which also ruled out funding for a Rotherhithe to Canary Wharf ferry, allocated £12m for major highway infrastructure.

This pot of money is for “design work for major renewals” on several of the capital’s major crossing points – but not the major renewal itself.

Two years ago, a TfL committee listed the Rotherhithe Tunnel as only behind Vauxhall Bridge as most needing significant renewal work.

The cost is expected to be as high as £120m, a report stated. “The deferral of these projects increases the risk of asset restrictions, and potentially closures, in the next five years in order to maintain a safe network,” it warned.

“For example, further deterioration of bridge components may require load restrictions to be imposed, or increasing faults on ageing tunnel equipment may necessitate short term closures for repairs or restrictions to reduce traffic volumes.”

Several of these restrictions have already come into force on the tunnel, including a ban on lorries using the crossing. Restrictions were placed on the tunnel in 2018

However, the report warned that without funding for renewal, restrictions may need to be extended “to buses and other motorised vehicles if the condition reduces further.”

As yet, no date has been set publicly for major renewals on the tunnel, because it is dependent on more government funding.

A TfL spokesperson confirmed the budget was being revisited following coronavirus, and said: “We continue to carry out work on our river crossings that is absolutely essential in the short-term to keep the network operating, and are planning the work required in the future to ensure they remain open in the long-term.

“This long term work is reliant on reaching a longer term sustainable funding agreement with the Government.”