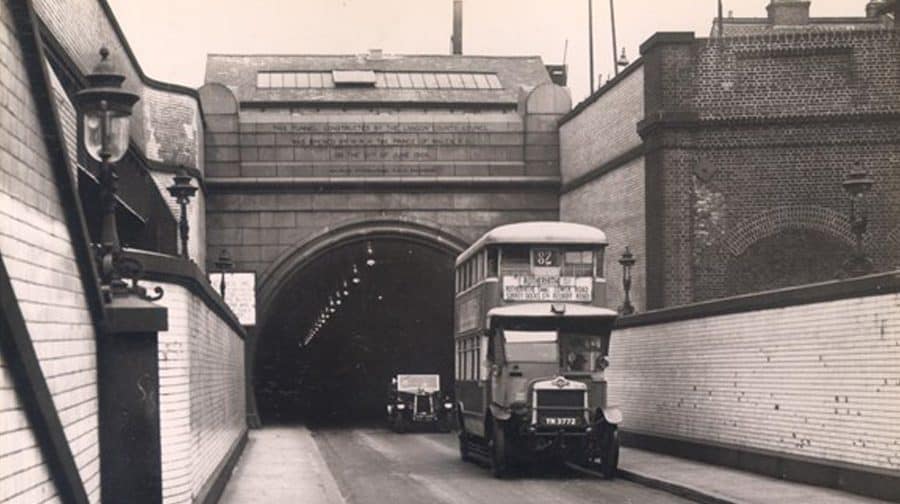 Today marks the 110th anniversary of the formal opening of the Rotherhithe Tunnel – which cost just £2million to build by the time it was completed in 1908, writes Simon Throssell…

Originally designed and built by Sir Maurice Fitzmaurice between 1904 and 1908, the crossing features a bend in the middle to stop its original users, horse-drawn carriages, from bolting once they passed through the entrance arches.

The 4,860 feet long tunnel connects Limehouse in east London to Rotherhithe; a journey that now almost 30,000 vehicles complete a day.

It took 800 workers four years to complete, a year and a half ahead of schedule, and cost £2 million to construct. Two huge tunneling shields were used to dig through the hard London clay. The movable barriers were moved forward inch by inch as the workers carried out their jobs behind. Nearly 3,000 people were displaced from both sides of the river to make way for the tunnel. It was formally opened on June 12 by   the Prince of Wales, who went on to become King George V.

The tunnel even has its own ghost story. Tunnel staff have told the tale of a wheelbarrow in the sub-tunnel ‘moving’ over night during maintenance closures, with one claiming to have seen photos of the ‘ghost’.

Transport for London’s (TfL) Director of Network Management, Glynn Barton, praised the tunnel, saying: “The Rotherhithe Tunnel is a vital part of London’s transport network and is used by more than 12 million vehicles a year.”

With an increase in the amount of traffic on the road, more than it was ever designed to carry, TfL have introduced significant measures in order to carefully monitor and manage the flow of traffic.

There are currently twelve CCTV cameras located throughout the tunnel as well as strict height and width restrictions to ensure safety when travelling.

“The restriction on vans and wide vehicles in the tunnel is important for its modern day use, as it reduces the risk of collisions” said Mr Barton.

In an investigation carried out by the organisation, TfL identified that up to 6,500 vehicles wider than the limit could be illegally entering the tunnel every day, despite the clear signage on all approaches highlighting the restrictions.

Drivers that ignore the restrictions risk receiving a fine of £50 or prosecution.

Vehicles that do not meet the requirements of the Rotherhithe Tunnel should alternatively use Tower Bridge or the Blackwall Tunnel – both of which are outside of the Congestion Charge.