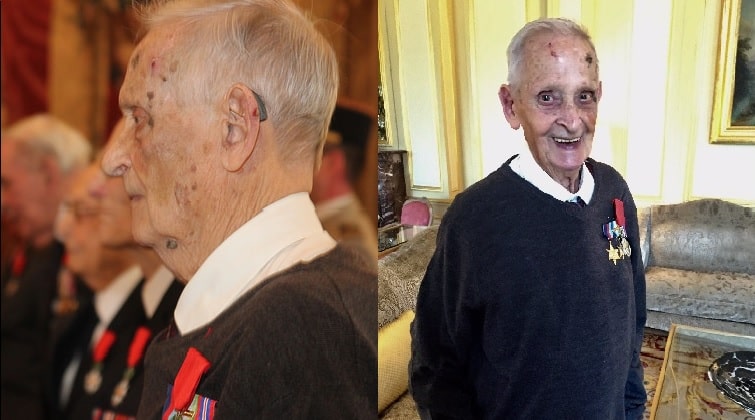 A 94-year-old World War 2 veteran from Rotherhithe, who was awarded the prestigious Legion D’honneur medal this week, has said that he’ll “treasure it forever,” writes Kirsty Purnell…

Albert Wiltshire, who made 35 landings in France, was watched by his three granddaughters as he received his honour on January 31 at the French Ambassador’s Residence in Knightsbridge.

The Legion D’honneur is the highest decoration in France and is awarded for outstanding services to the nation.

The ex-librarian, who was conscripted as a wireman (an electrician) in the Navy at the age of eighteen and a half, wrote to the French embassy before Christmas to see whether he fitted the bill for the award. Shortly afterwards, he received a letter stating that he matched the criteria – and was invited to received his honour at the French Embassy.

“I’d really hoped to see someone who had been part of my crew at the ceremony but there wasn’t anyone there,” said Mr Wiltshire, who served for over four years. “A lot of people have died now. The youngest person there was 90-years-old.”

The veteran has two children, four grandchildren and six great grandchildren. He’d been married for fifty years but sadly, lost his wife five years ago.

The Legion D’honneur is the fifth medal in his collection, with other decorations including the 45 Star and the Victory Medal from the UK Government. However, he’s keen to play down any glory. “When I went it was just a matter of routine. Everyone at that age went – you just joined,” he said. “I had two other brothers in the Navy and a cousin in the Royal Marines who was killed in Italy in the war. My family has done their bit,” he said.

While we live in uncertain times, Mr Wiltshire is hopeful that the world’s powers won’t come to blows again. “War is a thing of horror. Although the world looks terrible and has done for years and years, I don’t believe we will get to a state of conflict we did during the war. At least I hope we don’t!”