Rev Andrew Doyle is afraid of heights but will jump out of plane to raise £50,000 for Holy Trinity Church 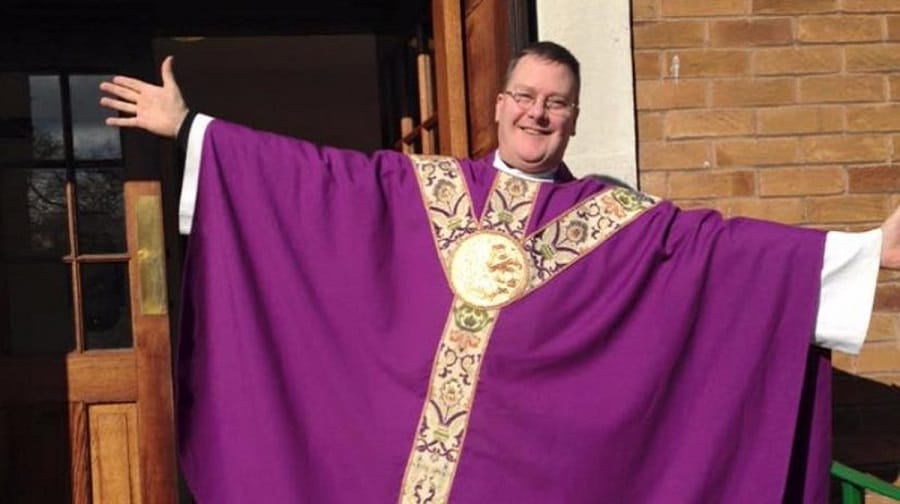 Rev Andrew Doyle will take part in a sponsored skydive to raise money for Holy Trinity Church, in Rotherhithe

A vicar who’s afraid of heights will tuck in his cassock and jump from a plane in a few weeks’ time, as he bids to raise money for his church.

Rev Andrew Doyle will take part in a skydive at the end of the month in an attempt to raise £50,000 for Holy Trinity Church.

The 54-year-old, who has been a vicar at the Bryan Road church for almost twenty years, said he was not looking forward to the jump.

“I’m not very good with heights, so I’m not looking forward to it,” he said. “But we need to fundraise for our pillars which are crumbling a little bit.

“I think we came across the problem a year ago: we noticed there was some cracking and as we had some work going on in the hall a builder had a look at it and put a drill in to see how deep it goes and the drill just went straight the way through.

One of the broken pillars in Holy Trinity Church

“Even though the architect plans show steel girders in the middle there aren’t any.

“We don’t know how many pillars are affected: there are at least three at the moment but it could be all eight.”

Rev Doyle said the church spent all of its savings and money from rentals less than a year ago on other building work, which cost £90,000.

The current Holy Trinity Church was built in 1959 after the original was destroyed during World War Two.

Rev Doyle said he believed the original church was the first church to be destroyed in at least London – if not beyond – during The Blitz.

Rotherhithe and Bermondsey were heavily bombarded by Luftwaffe planes during the conflict.

The parachute jump will take place at 7.15am on May 27 at GOskydive, Old Sarum Airfield, in Salisbury.

Rev Doyle has so far raised £3,865.23 towards his target of £50,000. To donate, visit: www.justgiving.com/campaigns/charity/holytrinity-rotherhithe/parachutejump

Shame Holy Trinity Church has to ask for money from hard-pressed local families instead of being able to use some of the £20billion+ (yes billion!) the Church of England has in the bank.