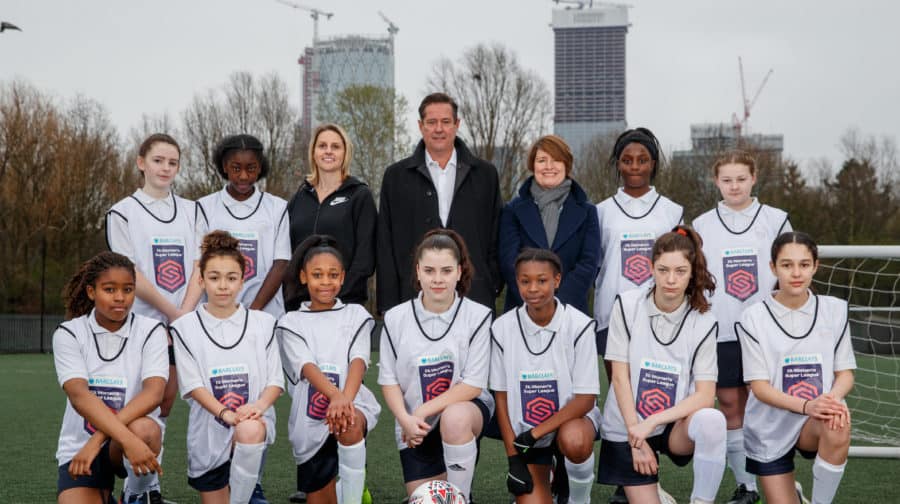 Pupils on the Bacon's College girls footie team meet Kelly Smith alongside representatives from the FA and Barclays as the major investment is unveiled (Image: FA)

A Rotherhithe secondary school has played host to women’s football legend Kelly Smith for a major announcement about investment in the sport.

Bacon’s College, on Timber Pond Road, hosted representatives from the FA and Barclays alongside Ms Smith, as Barclays unveiled a multimillion pound sponsorship of the FA Women’s Super League.

Pupils on the girl’s football team at the school marked the announcement on March 20 by testing their footie skills against Ms Smith – who is the England women’s football team’s record goal-scorer.

Fiona Morris, the school’s associate principal, said: “It was brilliant to welcome representatives from Barclays and the FA and the inspirational Kelly Smith to our school to make such an importance announcement for the future of women’s football – both for the elite game and at the grassroots.

“We were delighted that as part of the day our girls were able to show off their footwork too – their enthusiasm on the pitch was proof of the positive impact that community and school sport can have on young people.”

Ms Smith, who used her time with the girls to coach them on the skills and ambition needed to make it in professional football, added that the sponsorship was “a landmark moment” for the FA Women’s Super League and girls’ grassroots football.

“It was an absolute privilege to see our girls playing such a key part in the launch of the biggest investment ever in women’s sport and a huge step forward in promoting sport and physical activity for girls and women across the UK,” said PE teacher Ali Partridge, whom was there on the day.

“We are extremely proud of how well our students represented the College and continue to be excited to watch the next generation of young sportswomen develop here at Bacon’s!”