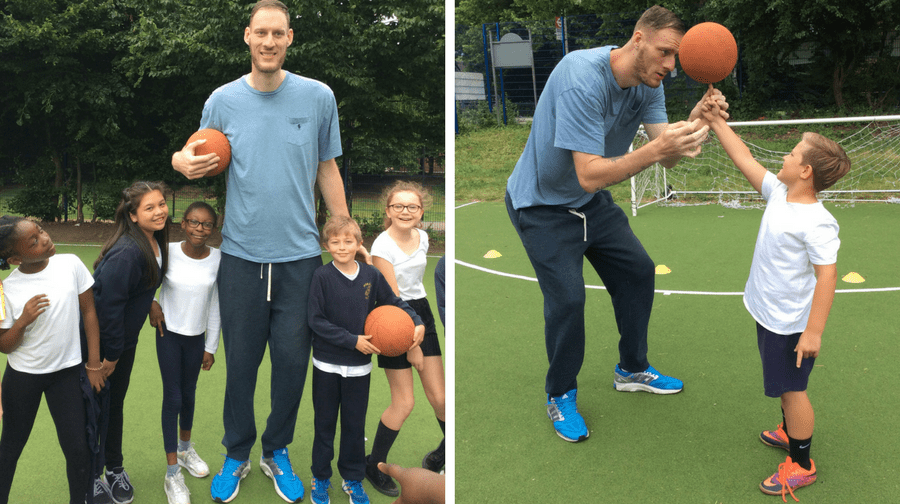 Children at a Rotherhithe primary have received a very special visitor to their school – someone they  could really look up to.

Paul Sturgess, the UK’s tallest man, standing at 7ft 7ins and weighing 24 and a half stone, captured the attention of pupils of all ages at Peter Hills Primary School during the recent visit.

The 29-year-old, who plays professional basketball for Harlem Globetrotters, in America, visited the school to deliver a motivational assembly and to take part in workshops with the children as part of National Sports Week.

Malachi Talabi, head of PE at Peter Hills, said the basketball player was an inspiration both to pupils and staff alike.

“Paul came in to give an inspirational talk on healthy eating success and physical abilities and achieving your best,” he said. “He’s had a long journey and said being tall has been an advantage, but he has also had his challenges.

“He hasn’t eaten McDonald’s for ten years and doesn’t drink fizzy drinks during season, so he was telling the kids to watch what they eat. The skills he can do from his height are amazing, so he showed some of the kids what he can do.

“Funnily enough, the kids were very well behaved and they literally looked up to him.”

Mr Talabi said the school thought Mr Sturgess was “fantastic” and that he might return in the future to speak to children as part of an anti-bullying day.

“He is helping us with our vision of transforming our school and the local area,” added Mr Tabali.

“We want to decrease obesity in our school and in Southwark and have a big emphasis on health.”