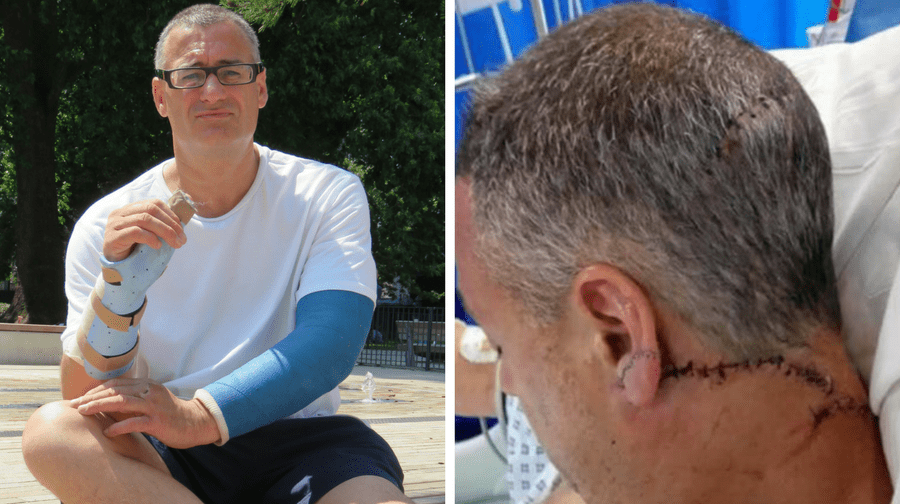 Roy Larner, dubbed the Lion of London Bridge, has called for yesterday's heroes to be given medals for their bravery

Roy Larner, the Millwall fan who bravely tackled jihadis in June 2017, has said the heroes who challenged yesterday’s terrorist killer at London Bridge should be given bravery medals.

Despite being passed over for official recognition himself after his bravery during the June 2017 atrocity, Roy told the News: “They should definitely get bravery medals for what they did.”

Heroic members of the public used a narwhal’s horn – grabbed from the wall of Fishmonger’s Hall, where the terror attack started – and a fire extinguisher to challenge terrorist Usman Khan. The view at the scene yesterday afternoon

Their quick-thinking actions in detaining him meant he could be shot dead before further bloodshed could be caused.

Two innocent victims were killed during the attack, while three more are in hospital. One has since been named as 25-year-old Cambridge graduate Jack Merritt.

Millwall fan Roy, who was dubbed the ‘Lion of London Bridge’ for shouting “F**k you I’m Millwall,” during 2017’s atrocity, said yesterday’s events brought back painful flashbacks of two years ago.

“It all brought back memories of that night,” he said. “I was up until 3am last night watching the news that things were happening so close to home again.

“Then you find out two people have died and it brings back a lot of memories of two years ago.

“Why was it allowed to happen again? Terrorism is terrorism and he shouldn’t have been let out at all.” Usman Khan, 28, has been named by police as the terrorist. He was known to authorities (Image: West Midlands police)

Suspect Usman Khan, from Staffordshire, had been convicted in 2012 for his role in a terrorism plot to bomb the Stock Exchange.

His indeterminate sentence was overturned by the Court of Appeal the following year, and police have said he was released from prison in December 2018.

He was reportedly on a tag at the time of yesterday’s attack.

Roy, who lives in Peckham, paid tribute to the quick-thinking heroes yesterday, saying: “No-one can knock them for trying to fight him off.

“I wish I’d had more people helping me that night. But then you can’t knock people who run away, because it’s not an everyday thing to happen.” Roy Larner, pictured in January 2018, has called for the heroes to be given recognition for their bravery

He called for people to continue to work and shop around London Bridge in a show of defiance against the terrorists, and said he would be going back down to the scene on Monday.

He added that he is expecting his flashbacks to get worse, as it is hard to avoid hearing about yesterday’s horrific events.

But he said: “I’ll be back down there on Monday just to try and ensure it doesn’t affect me going to all these places.

Roy Larner is a stone cold hero, who acted to save innocent people from murderous terrorists, taking no thought for his own safety. His reward was being placed on an “anti-terrorism watch list”, being sent to “de-radicalization” classes, and having his movements monitored by the police. Shameful treatment of a brave man. Let’s hope that the heroes who brought down the cowardly bastard who committed the murders on Friday receive better treatment than the Lion of London Bridge did.