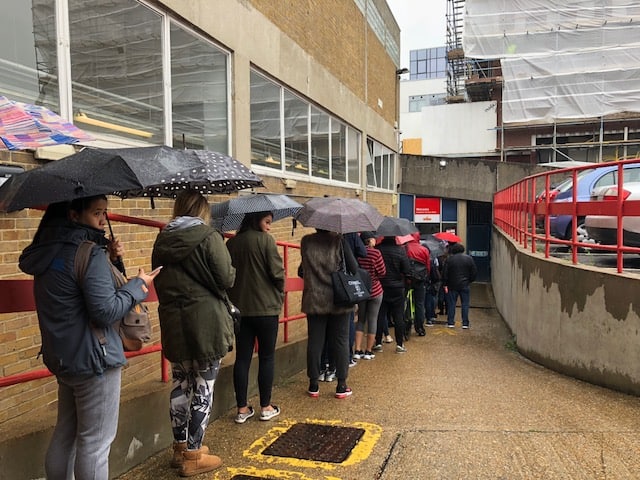 Southwark Royal Mail users have complained of postal chaos after the service moved its sorting office from East Dulwich to Peckham.

Despite fierce opposition from residents, the service moved its sorting office from Silvester Road in East Dulwich to Peckham’s Highshore Road on September 17.

Royal Mail said the move was necessary as the previous space did not have the capacity to deal with parcels and that the change would have no impact on deliveries.

However, customers have spoken out about the poorer service – facing missed deliveries, long queues and confusion over pick-up locations.

One, Margaret Pedler, said the transition had brought “total chaos” to the service.

She said: “Royal Mail have been failing to deliver parcels as promised claiming that addresses are inaccessible and they have then left cards or sent e-mails which still tell people to go to Silvester Road to collect their item.

“But when you click the link to find the opening hours or turn up there it tells you that the office is now closed and to go to Highshore Road! Complete confusion.”

The unhappy customer said she was made to wait for nearly an hour in long queues at the new sorting branch for her parcel. Bridie Cox, who lives in East Dulwich with her husband and three-month-old baby had a similar experience queuing for a parcel after it was not delivered properly to her home on Saturday.

She told the News: “My new-born baby and I went to the ED sorting office to collect the parcel, but there was a poster on the door saying all post was now in Peckham.

“I then had to take the baby on the bus to Peckham and arrived at about 12:25. I queued for half an hour outside, with my new-born, to collect my parcel.

“At 1pm the staff closed the doors to the office, meaning everyone in the queue was turned away.

“Why they didn’t let everyone in the queue collect their parcels is beyond me.”

Another customer queuing on Saturday, Rachael Penny, added that the “queue was huge” by the time she finally received her parcel but that “staff were doing their best.”

Royal Mail said it had undertaken “detailed planning” to minimise disruption to the service before the move was made.

Sally Hopkins, the organisation’s Senior External Relations Manager, told the News: “We apologise if any customer has mistakenly received a “Something for You” card giving the East Dulwich address.

We will double-check to ensure that all the old cards are no longer in use.”

The manager added that the move was needed to increase “the efficiency of our operation” with lower letter volume and increasing numbers of packages.

Customers also said that they now faced parking charges, which was not the case at Silvester Road.

MP for Dulwich and West Norwood Helen Hayes wrote in this week’s Southwark News: “I have written to the Chief Executive of Royal Mail demanding urgent action. We need the Highshore Road sorting office in Peckham properly staffed and a new pickup office for missed parcels and recorded deliveries to be opened in East Dulwich.”