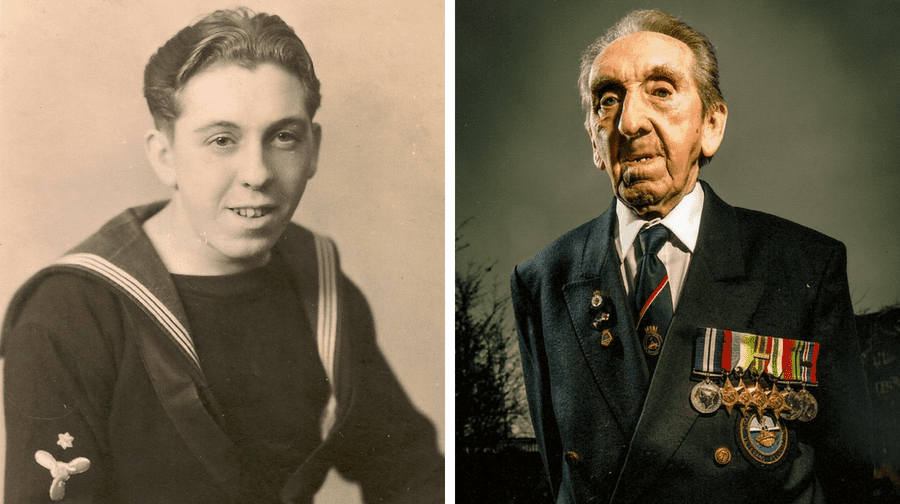 Bernie Coot served in the Royal Navy for nine years, saving dozens of lives in Dunkirk and Normandy

Naval officers and cadets lined the streets outside Southwark Cathedral to pay their respects to a Second World War Navy veteran who served in Dunkirk and Normandy, saving dozens of lives.

Bertram Alfred Coot, known as Bernie, lied about his age at seventeen to get into the Royal Navy as soon as possible so he could “step up” and help his country.

He had grand ideas of being posted to one of the big ships like HMS Belfast but was instead sent straight to the motor torpedo boats (MTBs).

Bernie began his naval career as an able seaman and lead stoker, responsible for getting the engines going on the high-speed short wooden boats, later rising to the rank of petty officer.

He was part of the Secret Boat Service and was responsible for saving many lives during the Second World War but rarely spoke of the horrors he witnessed, only opening up to his family towards the end of his life. “He did begin to open up a little bit about the trauma of it – although he said that that was the job and it’s just what you had to do,” said family friend Natalie Boatfield, 34.

“He was in the Secret Boat Service so they were like commandos who would go in to get certain people out; in Dunkirk and Normandy he would be pulling guys out and telling them to drop their weapons and telling them not to walk in a straight line because it was easier for the Germans.

“He had to get a Russian princess out of France through the sewers and managed to stop the Germans getting fuel to their trucks.”

Bernie was known for his “cheeky and mischievous” personality – but he was also fiercely loyal and determined and believed in the ‘band of brothers’ spirit.

“At one point they had a line of German E-boats in front of them and the only way for them to get past was to turn their engines off and just glide through,” said Natalie. “His captain was about to give up but Bernie said ‘no way, we are not giving up because they will only kill us anyway’.

“It was misty so they just slipped through and he fired as they were between two of the boats so they would fire at each other and then he switched the engine on and they sped off.

“Another time, when they were coming back from France the whole boat was shot up and they lost eight men with only four surviving.

“As soon as they beached the boat the commanding officer came down and really told them off for beaching it rather than taking it back into port.

“Bernie gave him a piece of his mind. It was that disposability of men’s lives that he didn’t like about Churchill.” “He got put into jankers [a form of military punishment] for 72 days for that,” said Bernie’s wife Joyce, 94, who lives at their home in Borough with their son Paul, 63.

“He said when he came out the ships all tooted him and everyone raised their caps and praised him.”

Bernie is also said to have rubbed shoulders with the Mafia in Sicily, gun running for them and later remaining friends.

When he came out of the Navy after nine years he decided to become a lorry driver because he loved to drive anything he could get his hands on.

Joyce, whom Bernie was married to for 67 years, said he also trained to be a boxer as a youngster – which came in handy in armed combat during his Navy years and later, in his 90s, when he found himself surrounded by a gang of men in the street. “When he was 95 he went to get his pension and three men tried to steal it so he knocked one of them out and the other two did a runner,” explained Natalie. “He was feisty.”

Bernie was born in Waterloo on January 9, 1921, as the third of four children.

He died aged 97 on May 31 this year, just six weeks after being diagnosed with lung cancer.

A funeral was held for Bernie at Southwark Cathedral on July 3, with Royal Navy representatives of different ranks and cadets saluting him as his coffin was carried inside.

Half of Bernie’s ashes will be scattered from HMS Belfast into the River Thames and the other half at Dover with the help of a lifeboat crew.