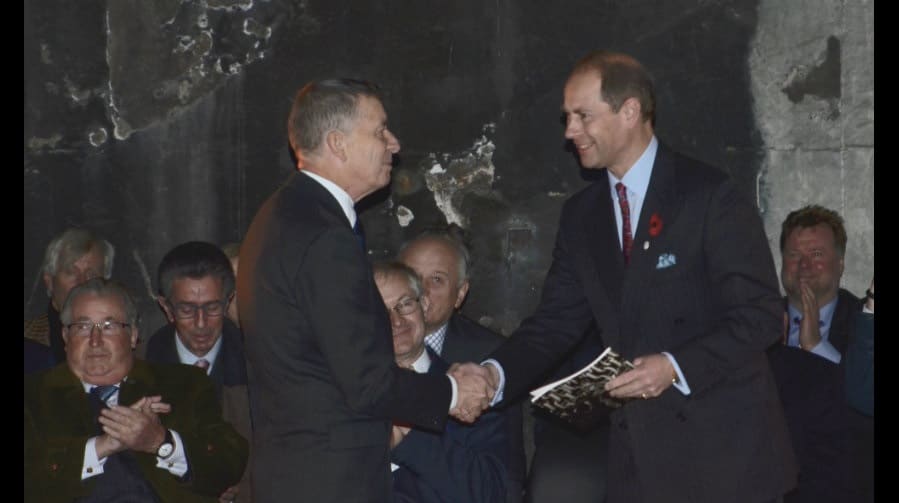 Prince Edward has given the Brunel Museum’s new underground theatre the royal seal of approval, reopening the London Underground’s oldest structure as it returns to its entertainment roots.

The Earl of Wessex officially re-opened the 150-year-old Grade II listed Grand Entrance Hall in Rotherhithe, on November 9, to an audience of 120 people. Theatre Lapis performed an excerpt from their play The Red Candle: Mermaids in the East, which is running until November 20.

Prince Edward congratulated the Museum on the new gallery and historic, atmospheric performance space, which is half the size of Shakespeare’s Globe. The Prince also thanked the volunteers who created and maintain the gardens, as well as children from Albion School, who created award winning sculptures for the grounds.

A new book, Brunel’s Great Eastern, was also launched, with a foreword written by actress Joanna Lumley, who described Brunel as a man who loved the arts and the theatre.

Engineer Isambard Kingdom Brunel, whose first and final projects were in east London, built a railway to Bristol, the first steamship to cross the Atlantic, and the ship that laid the first trans-Atlantic cable, but the underground theatre is said to be one of his most extraordinary creations. The Tunnel was intended for cargo, but in 1843 it was full of sword swallowers, fire eaters, magicians, Ethiopian serenaders, Indian dancers, Chinese singers and dancing and performing horses. Entertainers were forced to leave in 1865 when the Tunnel was sold to the railway and became a vital part of London’s transport network.

Brunels’ Great Eastern with epigram by the Prince and introduction by Joanna Lumley is out now.