Cathy Dean is tackling rhino poaching one step at a time 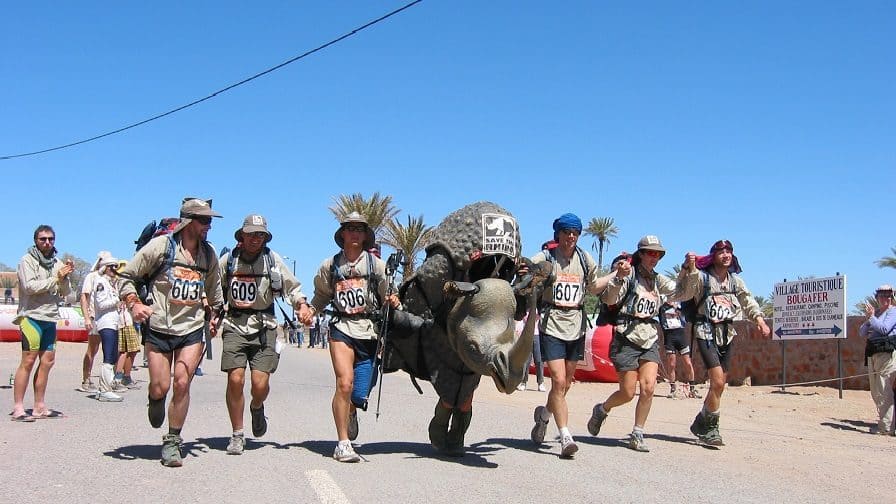 A runner in costume crosses the finish line

A 52-year-old from Borough will be running a 230 km ultra-marathon over five days this August – often in full rhino suit – to raise funds for the rangers who protect Africa’s endangered wildlife. Save the Rhino’s CEO, Cathy Dean

Cathy, who has been CEO of charity Save the Rhino International for seventeen years, will take part in the new For Rangers Ultra Marathon this August.

The Trinity Street resident will run a total of 230 kilometres in five days across Kenya’s Laikipia County, whilst carrying her own backpack, food and camping equipment.

All funds will go directly towards the ‘For Rangers’ fund to support the African rangers who protect rhinos and other endangered species.

Cathy will join a team of seven other Save the Rhino supporters, who will all take turns to run wearing one of the charity’s famous rhino costumes – best known for their annual appearance at the London Marathon – for stretches of 10km at a time.

The route will see them run through ‘Big Five territory’ alongside wildlife rangers and in conservancies populated by rhinos, elephants, lions, leopards and buffalo in the surrounding landscape.

On average, three rhinos a day are killed by poachers for their horn, which is illegally traded and sold in some countries in Asia – especially Viet Nam and China – where it is regarded as a luxury good and status symbol.

It can also be ground down and consumed with water and taken as a ‘detoxifier’, or ‘hangover cure’, despite having no known medicinal properties. Habitat loss is another key threat.

For Rangers is a fund set up to fundraise for ranger welfare in Africa, to help the men and women protecting rhinos from poachers.

Rangers can work day and night in the African bush away from their families for weeks at a time, and face dangers from armed poachers to unpredictable wildlife.

Cathy told the News: “In London, I can close the door on a bad day at the office, rangers can’t.

“Day or night, they have to deal with calls that put their lives in danger.

“This run may be tough, but raising money to support the incredible rangers working to protect rhinos is what it is all about.

“It will be a privilege to run alongside them.” Rangers in Kenya (c) Cathy Dean, Save the Rhino International

In recent grants, the Bermondsey Street-based charity has paid for a group life insurance policy for rangers working for multiple reserves in Kenya and Tanzania, so that if they are killed by poachers, wildlife or in a road accident, their widows and children will be financially provided for.

Cathy says she is relishing the challenge, despite describing herself as ‘someone who has previously disliked running and been a bit of a plodder’, and who considered herself retired from ultra-marathons.

This will be her third ultra-marathon – having completed the gruelling 251 km Marathon des Sables in Morocco’s Sahara Desert in 2003, and the Atacama Crossing in Chile in 2006.

She has also ran the London Marathon several times, but was forced to pull out of last year’s event due to an injury.

Her ambitious plan has clearly struck a chord, as she has already raised more than £7,000 against an initial target of £5,000.

The run will take place from August 01-05, just a day after World Ranger Day is celebrated on July 31.

Cathy will be sharing her ultra-marathon progress with the News via WhatsApp.

To sponsor her, visit: www.virginmoneygiving.com/CathyDeanForRangersUltra A black rhino in Kenya (c) Save the Rhino International

Save the Rhino raises funds to protect all five species of rhino – black and white rhinos in Africa, and Greater one-horned, Sumatran and Javan rhinos in Asia.

The white rhino is classed as ‘Near Threatened’, with an estimated population of around 20,000.

There are two sub-species, the Northern white Rhino – with just two animals left, and the Southern White Rhino, which has between 19,682 and 21,077 animals.

There are 3,350 Greater one-horned rhinos in India and Nepal. The semi-aquatic animals are good swimmers and like to dive and feed underwater. They are classed by environmentalists as ‘Vulnerable’.

The Sumatran rhino is Critically Endangered with less than 80 animals remaining on the Indonesian island of Sumatra.

The Javan rhino could be the rarest mammal on earth, with just 67 animals left in one Critically Endangered population on the Ujung Kulon peninsular on the island on western Java, Indonesia.

As well as poaching, both Sumatran and Javan rhinos are threatened by habitat loss and a decreasing genetic gene pool.